When it comes to DVRT movements people actually really love to do, there is something empowering about our power cleans. Maybe it is the feeling of being powerful, maybe it is a more “athletic” lift that connects us to our natural movements a bit more, maybe it is just flat out fun to do. No matter what, DVRT power cleans do play an important role in our system and they often do get used wrong in their performance.

Saying people do something “wrong” definitely is polarizing and people don’t like to believe there exists a “wrong” today but rather just “my way” of doing something. That can be a whole different discussion for another time, but when I reference “wrong” I am referring to techniques that can result in injury (either immediate or over time). My point is I have nothing to gain from giving you better ways to do power cleans in DVRT other than helping you get better results and being safe. 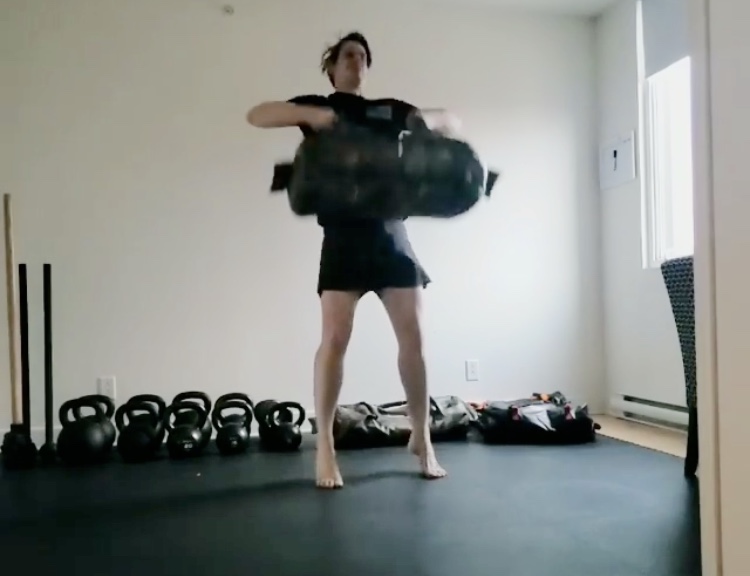 Now that is out of the way, let’s get down to how to use our DVRT power cleans better and seeing how much more we can get out of the movement.

DVRT Master, Cory Cripe wrote a great blog on why how we teach which handles to grip and even HOW we grip the Ultimate Sandbag itself plays a big part in the results we get, or we don’t! Using the right handles is a great example of showing you how we designed something with a specific purpose in mind.

In barbell power cleans, when you grab onto the barbell you are taught to “break the bar” which creates a stable platform for the spine so that the hips can produce optimal power. Since the lats play a big part of the stability for the trunk, breaking the bar is very important. However, if you try the SAME strategy with the Ultimate Sandbag, the snatch grip handles will fold (snatching is a different story that we can discuss another time).

DVRT Coaches, Steve Holiner and James Newman show that the grip for going Front Load or onto Fists is the same!

If we look at our normal anatomical position, our body is closer to working from its optimal position if we have our hands more neutral than turned over. Obviously with a barbell we don’t have such an option which is why we get an advantage in using the Ultimate Sandbag. It isn’t just grabbing the handles though, but actively pulling them apart that gives us that really great “plank” that puts the stress through our hips and NOT our low back!

Technique #2: Get the Elbows High!

Outside of using the wrong handles, the most common mistake in performing our DVRT power cleans is not getting the elbows high enough. On light weights, many people can “cheat” the movement because of the lighter weight and just sort “roll” the weight up. That create a bad habit that results in not progressing to heavier loads well as well as just decreases the effectiveness of the power clean. 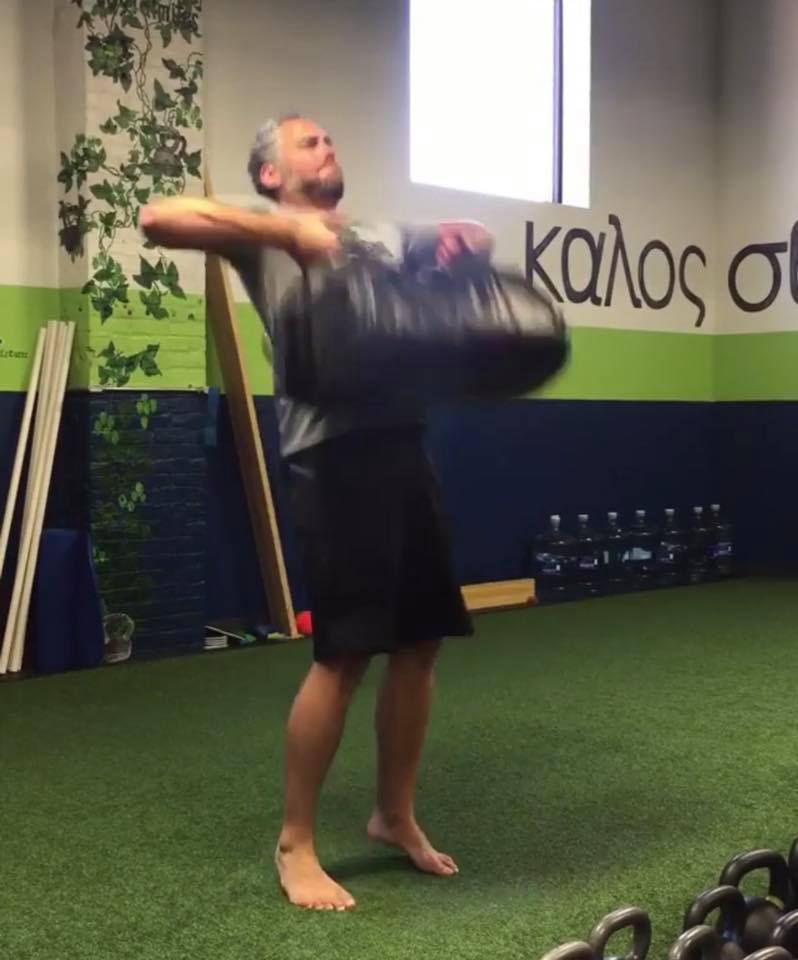 If people say they are bruising their arms, or “thumping” their chests from a bad impact of the Ultimate Sandbag, the first place to look is bad elbows! That is why we follow using high pulls as a teaching tool for better power cleans. The high pulls suppose to teach how to create a “float” of the weight up our body, but also the importance of getting our elbows UP in the power clean.

When elbows stay low or even “glued” into the side, that is where we get bruising or thumping of the weight on our body. Of course we don’t want that and that is why getting the elbows high is so important!

One of the biggest differences of doing power cleans with the barbell vs our Ultimate Sandbag is that in Olympic lifting the barbell is usually “dumped” after it has been cleaned. A big part of that is due to the position of the barbell during the clean, it really isn’t very safe to lower it down (not that it is impossible, just higher risk). Combine that with the fact that the sport of Olympic lifting is only concerned with “what goes up”, you can see why that technique is used.

However, if you have ever cleaned pretty much ANYTHING other than a barbell, you know the weight isn’t just dropped down or let go. Kettlebells serve as a good example as a big part of teaching the kettlebell clean is how you properly absorb the weight with your hips as you lower the weight. That keeps the force from being transmitted up the elbow, shoulder, neck, and even back! Well, the same is true of using our Ultimate Sandbag, you don’t want to just drop the weight, but catch it with your hips.

Learning the DVRT system can be overwhelming because of all the moving parts, but if you’re going to do one thing right, DO THIS!

That is where the high pull can help again as that is the other half of the movement. Learning to move quickly to decelerate the weight can be more challenging to many people than actually lifting the weight. However, there is SO much value in learning how to decelerate well that has great transfer to building injury resilience!

One of the funnier, but true statements in our DVRT system is that size matters! Yes, all the jokes can come out, but we are referring to the dimension of the Ultimate Sandbag. A big mistake most people make when they are teaching power cleans is they use too light of a weight as they are fearful people will hurt themselves.

Well, the issue becomes there isn’t load to work against and that load helps people learn. Point being, you can use a Core Ultimate Sandbag to teach power cleans, but it is actually in many ways more advanced because you don’t get the feedback of the load. Plus, performing power cleans with different size Ultimate Sandbags change the range of motion on the lift.

If using a Core Ultimate Sandbag, for example, you will probably want to clean from a step or just start from mid-shin position, going to the ground is going to be too low for most (the Force Ultimate Sandbag is similar in diameter and should be thought of similarly). The Burly Ultimate Sandbag brings our starting position higher which requires MORE rate of force development (ability to develop force faster) to move the weight. So the Burly is not only larger and heavier, but changes the movement as well. These are differences we need to be aware of in our training!

Many people question if doing a power clean with an Ultimate Sandbag can build the strength and power we find with the barbell. Of course the loads aren’t really comparable, so why and how would the Ultimate Sandbag even be a viable option?

Second, we don’t move in life and sport JUST up and down. Once we establish that foundation we want to teach how to move and create high levels of power, as well as the ability to decelerate. That is why we progressively want to add movement with a series like…

Just with that in mind, we have 7 options to progress your power clean training in DVRT. Add in things like going off-set, going to fists rather than front load, using Shouldering and our list of progressions and solutions to power cleans in DVRT is far more extensive than you will see anywhere else!

These great fitness pros share how we build and progress our power clean so that with some practice anyone can develop these power clean skills!

Power cleans are a hugely valuable tool for pretty much any fitness goal. As we get to more meaningful and sophisticated forms of training, our need to understand the intent and techniques become more important as well. Watch these videos and see how you can create such success easily with being mindful of important cues.

Exercises like power cleans are often praised for their avid build great power. We tend to think that heavier loads means more real world power. Is that the case or is building more sophisticated power movements the goal? Today I break down how the instability and ability create more direct links to real world power is what makes our DVRT cleans so important!