I love being able to help people that are determined to reach their fitness goals actually achieve them. In fact, I feel so frustrated for them when I hear about how many things people have tried and gotten no where with, it sucks!!!

Unfortunately, many times the advice they get isn’t all that helpful. More and more I tell people one piece of simple advice that changes their training and results completely….GET STRONGER! Now, before you put your head down to shake it. This isn’t the super general advice that floats around fitness. I’m talking about something SPECIFIC when I tell them to get stronger.

That is get strong in the Front Loaded position. Why? It will have the BIGGEST impact in building core and total body strength pretty much unlike anything else. One of the biggest reasons that people struggle to make progress is they are just weak in the key core muscles that allow them to be real world AND gym strong!

What makes our DVRT Ultimate Sandbag Training Front Loaded position so good? Well, let me address the elephant in the room. That is, “isn’t this just the Zercher position?” For those that may not know, there was a famous 1930’s strongman named Ed Zercher. Before the time of squat racks, Mr. Zercher would perform great feats of strength by squatting and deadlifting a barbell in a manner that would earn him the namesake. 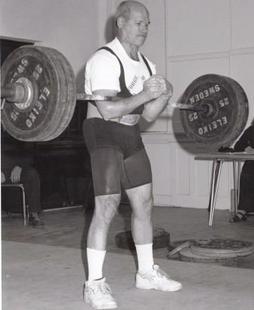 I could understand why people would want to call our Front Loaded position a Zercher as I even DID in the early years of DVRT Ultimate Sandbag Training. Visually they look very similar.

In order to help you better understand the differences and value of the Front Loaded position let’s look at some concepts. Instead of looking at it from my perspective I’m going to quote strength coach, Christian Thibaudeau. So, let’s delve deeper by looking at some of his ideas on the Zercher and see if we can make this YOUR new favorite exercise that actually makes you better!

Coach Thibaudeau writes in his article (you can read here if you want)….

“The Zercher position increases the involvement of the whole upper back musculature: the traps, rhomboids, and rear delts. So in that regard, the Zercher squat can help solidify the back during the front squat and deadlift.

If your weakness in the front squat is “losing” your upper back on the way up – your upper back rounds and the bar drops forward – then the Zercher squat will help you. If your barbell deadlift fails at knee level, the Zercher can help you there too.”

Sounds great right?! Here is one major problem, when using the barbell you can’t actually fully activate the upper back to the max because you can’t put any tension against the barbell. The fact the barbell sits in the crooks of the arm is good, it does want to pull the body forward, but it is hard to actually use the RIGHT muscles because outside of the placement of the load, the weight doesn’t offer any opportunity to make our body work smarter!

One of the biggest mistakes that I find time and time again when people try to use the Front Loaded position with our Ultimate Sandbag is they treat it like a Zercher. That means they actually don’t create an “active” upper body. Due to the fact that the Ultimate Sandbag has dimension AND load that causes the arms to drop forward, leading to the shoulders to do the same and LOSING some of the main benefits of the exercise. The simple act of pulling the weight into the body, or trying to “break the bag apart” COMPLETELY transforms the feel of the Front Load position and instead of feeling it in a bad way in the back, you feel strong, stable, and actually feel your core muscles.

That is because the name of “Front Load” refers to a Front Plank. Just as in a plank, we want our arms vertical and active, we want tension in our lats, we want to create proper tension through our entire chain to help ourselves learn to be strong! That means dropping the elbows or letting the elbows flare out (in what we call chicken winging) actually makes you weaker and more likely to feel your low back!

Speaking of Your Core!

Coach Thibaudeau also talks about one of the biggest known benefits of the Zercher position, the core! “Zercher squats and Zercher deadlifts can work your core harder than regular squats and deads. So if your weakness in the squat is your mid-section, the Zercher squat will be a formidable movement for you.”

I won’t tell you that you won’t feel your core when you do a Zercher squat or deadlift. You will FEEL your core, but feeling and learning to USE your core are actually two different things. Most of us again forget that our core doesn’t work by itself and actually relies heavily on other muscles groups such as the lats to help create stability. 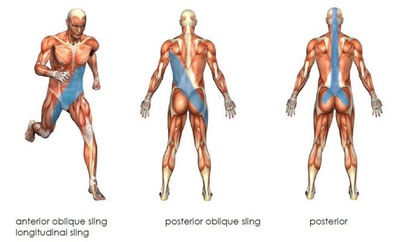 One of the big reasons that a lot of people don’t use the Zercher lift as a main exercise is that they begin to feel their low backs as much as their core. Especially as they begin to go heavier in the exercise. That is because they can’t create tension in the upper body with the barbell.

Think about your plank on the ground. Get in that position and now relax your forearms and feet. You feel weak? You feel your low back a bit? Now, DRIVE through your hands, forearms, and feet, feel strong and stable? Did you low back discomfort go away? That is WHY an effective exercise isn’t ONLY about “feeling”, but learning how to use the body in the best way’s possible.

Having the Ultimate Sandbag in that Front Load position allows us to create a similar effect as we would on the ground to not only feel our core working, but to teach it HOW to work better!

One of the points Coach Thibaudeau makes is, “The Zercher squat is the squat variation that allows you to go the deepest. Yes, even deeper than the front squat.

That makes it a great movement to build the quads and glutes. But it’s also a very solid assistance exercise to increase your strength out of the hole in the squat.”

Well, this is true to a degree. If you don’t have the core and upper back strength to support the load people tend to lean too much into the movement and don’t get what they should out of the exercise. Also the barbell iteself can be an obstacle. 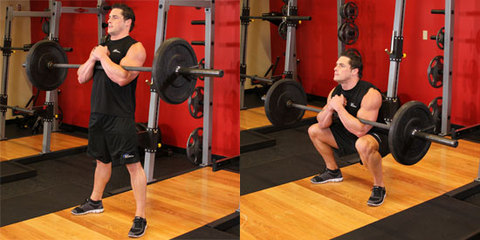 You will see having the load in a slightly different position will allow us to actually get deeper into the squat. That AND the tension we can create against the weight! 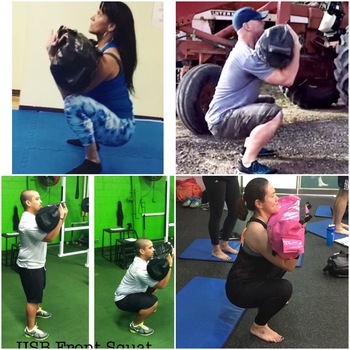 Going deeper allows us to get MORE out of the movement for the core and lower body. This difference in load placement plays a HUGE role in not only getting people to squat better, but the fact that people typically can’t handle anything CLOSE to the weight of an Ultimate Sandbag in the Front Load position as they could with the barbell in a Zercher position.

There is one more benefit that most overlook though. Being able to create better core stability actually allows our hips to become more mobile. This goes back to the concept we have discussed many times of “proximal stability creates distal mobility.” In other words, if your core is more stable, your hips and shoulders move better. Cool right?!

If all of this doesn’t make a lot of sense to you why we think the DVRT Ultimate Sandbag Training Front Load and Zercher positon are different, there is ONE very last important point. This isn’t a Josh thing, it is pretty much an everyone thing….Zerchers HURT! What do I mean?

Anyone that has spent time doing Zerchers knows it hurts your arms, like A LOT! If it didn’t I am convinced you would see them as a way more popular squat than front or back squats, but they do! Even if you are tough and you can get through the miserable feeling they put you through, why would you when there IS a better option?!

One of my goals with such a post is not to just explain differences between Front Load and Zerchers, but to get you to THINK more about how the little details of an exercise make ALL the difference in the world. So that you can choose the RIGHT tool, the RIGHT variation of an exercise so you can actually get the results you want!