When I began training clients in commercial gyms in the early 2000’s most trainers were horrified at what I was doing. I had clients performing cleans, high pulls, snatches, exercises that most other trainers thought were flat out dangerous! Funny how fast forward to today, Olympic lifting is done by everyone. While Olympic lifting has become popular part of the problem is that people really don’t know the “why’s” of these lifts or really even the purpose.

There are some people that MAY have seen these lifts in the Olympics, that is if you are watching them in the middle of the night! The truth is that Crossfit is probably the biggest reason that people see these lifts in the mainstream once again. Believe it or not, Olympic lifting was very common until fitness machines slowly pushed them out of the marketplace.

With their “re-birth” there is a lot of confusion about Olympic lifting and even some controversy. What we see currently in Olympic lifting wasn’t always what the sport was based around. There have been two major changes to the Olympic lifting (don’t worry, we will explain how this impacts YOU in a moment), one was the fact the squat clean/snatch we often see is pretty new. Up until the 1960’s, the split style was thought the best means to perform these lifts. However, lifters found they could lift more weight with the squat style and that quickly took over. 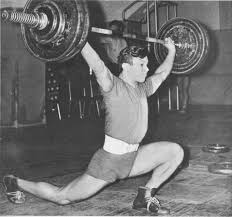 The second big change in Olympic lifting was the removal of the press in 1972. Yes, there were actually three lifts, but because of the fear that lifters were adopting unsafe techniques in an effort to lift more weight, it was taken out of competition.

So, what the heck does this have to do with YOU! Olympic lifting was always viewed as a very athletic style of lifting weights. Typically we think of lifting weights as robotic and anything but athletic. However, the flexibility, power, and strength many of these athletes possess are really impressive. Yet, for many they could be intimidating and questionable for their fitness goals right?

Power Development: As we get older the first quality we lose is power. In fact, research has shown that our fast-twitch muscle fibers are the first to go which can lead to health issues such as falls. For fat loss, power training can stimulate sprinting like effects with actually less stress on the joints.

Hip Drive: The hip hinge used in Olympic lifting teaches people how to use our power center (glutes and hamstrings) instead of our low back to create force and to lift properly. A lot better way of training your glutes than lying on your back all day.

Some pretty good reasons and I bet you are ready to start finding out how you can benefit, well not quite yet. There are some draw backs to Olympic lifting.

Why Olympic Lifting May Not Be For You!

Lacking Strength: Many Olympic lifters spent YEARS building a base of strength before technique training became a priority in training. Like most things in the modern era, we flip-flop these methods. It makes sense though, how much power can you create if you can’t even create much force? Even more so, if your body is not strong and stable, you have a weak foundation to actually create or absorb force. This has been one of the hardest critics in why the US has been so terrible in the sport for so long. So, spending time on many of these DVRT Ultimate Sandbag Training exercises such as Front Loaded Squats, Front Loaded Good Mornings, Shoulder Lunges, Leg Threading, Military Presses, you can build a solid foundation to actually reap the benefits of Olympic lifting.

DVRT Master, Cory Cripe, shows how we need a foundation of strength before power!

The Right Equipment: This doesn’t get talked about too much, but it is VERY important. If you don’t have the right bar the spins on the ends and such, your elbows, wrists, and shoulders quickly become tragic casualties of trying to learn these lifts. Don’t even think about doing this at your commercial gym, trust me, I have done it and paid the price! So, you will add in some bumpers plates to your barbell so that you aren’t afraid about killing yourself while learning and now you are into an investment of $500 easy!! I didn’t say this was a cheap hobby. Oh, did I mention that most people will also get the shoes for another $100 plus?

My #fitnessgoals have changed a lot over the years. I use to think my fitness was simply defined by what I could lift. Learning I have a degenerative spinal disease has made appreciate and thinking about moving and being strong in far more different ways. Knowing that my #strengthtraining should teach me to fluid, coordinated, reactive, starts to really define for me what #functionalfitness is all about. This Ultimate #Sandbag clean matrix demonstrates how more 3-D my thoughts on strength have become! #movementculture #ultimatesandbag #coreworkout #strengthandconditioning #sandbags #mensfitness #glutes #hiit #conditioning #sandbagworkout #crossfit #fitover40 #personaltrainer #fitnesscoach #sandbagtraining @perform_better #performbetter

You don’t think that we can make Ultimate Sandbag Training has enough ways to challenge the Olympic lifting style?

HIGHLY TECHNICAL: Funny enough to actually obtain the benefits of Olympic lifting, you have to be able to perform it well. There are many technical components to this style of training that really keep people from getting the true benefits. Even Strength Coach and VERY strong proponent of Olympic lifting, Dan John, has said it has taken him 13 years to master the Olympic lifts. Coach John is not a shabby athlete almost making the US Track and Field Team after the age of 40!

Technique has to do with being strong enough, flexible enough, and timing just right. A weak link in any area can keep a person from really benefiting from Olympic lifting. That is why over time I have become less and less adamant about fitness spending a lot of time on Olympic lifting. In fact, because even Olympic lifters will tell you that the volume of work (the amount) is generally low, because it is hard to maintain technique when fatigued, it really doesn’t help build muscle or help lose fat.

What do you do? In our next post I am going to offer you some great solutions for Olympic lifting and how to use these ideas and make them fit your goal, not become them. For now, enjoy this video on Ultimate Sandbag Training Olympic lifting!

DVRT Master, Greg Perlaki, shows how much further we can take movement power based training with DVRT. Find out more with our DVRT workouts or take another challenge with adding to your Ultimate Sandbag gym, both 30% off with coupon code “thanks” HERE

We love opening people’s minds to find twhat #functionaltraining can be if we think how we move with such fluidity in life and build progression. @dvrtfitness_uk shares the great value of this advanced Ultimate Sandbag #snatch . ・・・ Real world #strengthtraining means to be able to accelerate and decelerate with power and strength. As we get older power is the first thing we loose, so it’s important to incorporate power exercises in our routines. ——- The Sprinter Snatch to Balance has the ability to create that unilateral power that comes from the feet and #glutes, involves #core stabilization and needs Thoracic mobility to master the overhead movement. The primary driver is the Hips on the way up as well as the way down to catch the Ultimate#Sandbag Using this versatile tool also allows me to teach people for more complex movements (like Olympic lifting type of exercises) that they would not necessarily do with a barbell. —— If you’re passionate about helping people and like to learn more about movement and strength training that gives you straight forward, easy to applicable solutions to your clients then I invite you to join me for the upcoming #DVRT workshop on 28th October in Chester @s3_fitness #fitnessforlife #functionaltraining #functionalfitness #movementculture #coreworkout #coretraining #ultimatesandbag #menshealth #physicaltherapy #ultimatesandbag #crossfit #personaltrainer #mensfitness #powertraining #fitnesscoach #sandbags #kettlebell #sandbagworkout #hiitworkout #sandbagtraining #conditioning #performbetter #strengthandconditioning #fitforlife