One of the positives about social media is getting ideas to discuss topics that people have questions about, but never actually ask! Recently, renowned fitness expert, Rachel Cosgrove, showed one of our favorite more advanced Ultimate Sandbag drills. In the comments section someone asked a question that probably comes up in people’s minds more than some would think. “Do you prefer to use Ultimate Sandbags versus kettlebells for that drill?”

Make sure at the top of your priority list this busy time of year is YOU! Make time for your workouts no matter what! Your workout is your time to regroup, feel better, get stronger and be able to tackle everything on your list! It’s non-negotiable. With this exercise I’ll be able to carry all the shopping bags!

Instead of trying to “sell” you one kettlebells versus Ultimate Sandbags isn’t the BETTER thing to do is clarify the unique benefits each has to offer? I think it isn’t genuine to say Ultimate Sandbags are better than kettlebells or vice versa. Many of you know that I got really inspired in the early 2000’s by what kettlebells had to offer.

Had to believe my first certification for kettlebells was so long ago!

What ARE the differences as most people think one or the other is “good enough” to use and don’t realize that using the wrong or right tool for the exercise has a PROFOUND impact on the results we get. It goes both ways too, we don’t use Ultimate Sandbags for the role of kettlebells and the reverse is true too. In order to “get it”, let’s cover 3 reasons that kettlebells and Ultimate Sandbags are different!

This doesn’t make one better than another, but it does make them VERY different! When Rachel responded to the question, beside touching upon the safety issues with using kettlebells, she discussed that the Ultimate Sandbags are “alive”. Meaning, that they move more causing the body to react to a higher level activating more muscles.

While most people assume the unstable nature of Ultimate Sandbags ONLY comes from their shifting of sand, the truth is they come in many forms. One of the most missed point of being alive is the dimensional component of the Ultimate Sandbags. While most tools either standardize their size (barbells never really change size), we use it as a way to manipulate a drill. When Rachel moves the Ultimate Sandbag around her body the dimensional component gives the weight momentum that the body has to work against.

This comes across in when we do things like Lateral Drags as well. The size of the Ultimate Sandbags give more friction to the ground and the interaction with the handle allows us to create tension that gives us better core stability. 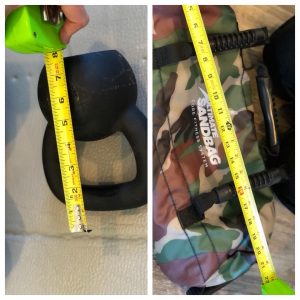 This isn’t a bad thing with kettlebells as it just isn’t part of their programming to use this variable in the training. Because kettlebells are not alive weights they are perfect for grooving very high volumes of work. For example, kettlebell sport is a strong strength-endurance sport that wouldn’t be possible to perform if the kettlebells were unstable. That is why people feel COMPLETELY different performing a kettlebell snatch test compared to our Ultimate Sandbag Clean and Press test!

Reason 2: Kettlebells Are One Unit

I wrote about this the other day on different forms of kettlebell swings that make us realize the BEST tools for kettlebell swings are kettlebells. However, we can use the Ultimate Sandbags for other forms of the movement (you can read more about it HERE).

The fact the kettlebells are one unit doesn’t make them good or bad again, just different. For example, because the Ultimate Sandbags are made of many individual components, we actually use this to create tension into the handles by pulling them apart, but also by having no slack on the handles. The fact the handles on the Ultimate Sandbags are NOT one unit with the weight means they give an element of instability and understanding how we use them is VERY important.

It is this difference that make drills like swings TERRIBLE with Ultimate Sandbags, but teaching Cleans and Deadlifts even easier with them!

Grip is a highly discussed subject on both tools, but they are used differently because of these differences. Plus, with kettlebells your options on WHICH handles to use is minimal right?

I think one of the things that make people think that kettlebells and Ultimate Sandbags are very similar is sometimes the holding position of the load looks almost the same. However, looks can be very deceiving as even though the holding position LOOKS similar there are profound differences.

For example, when the Ultimate Sandbag is on the shoulder it looks similar to kettlebells being in the single rack position. However, when you actually perform them you feel how the weight on the shoulder pulls the body to the side much harder because the weight is not more forward to the body. Instead of looking as one better than the other, we can see them as looking as progression. Where holding a kettlebell in the single rack can help build lateral strength to holding Ultimate Sandbags on the shoulder.

An even better example could be a Goblet Squat compared to Bear Hug Squat. Man, they look so similar from the outside, but as DVRT Master and Kettlebell expert, Steve Holiner shows, they are VERY different!

Here is a way to blend kettlebells and Ultimate Sandbags not to compete with one another but to build layers to greater success!

Understanding our tools gives us a better ability to create superior results. Our tools are our way of creating specific stress upon the body and teach movement in unique ways. If we don’t see the unique aspects of our tools we don’t have “more tools in the toolbox”, we just have more “stuff” that we don’t really know how to optimize!

Check out how we combine kettlebells with DVRT Ultimate Sandbags with great programs HERE and want to build your functional training gym? Save 30% all throughout our DVRT site with coupon code “holiday” HERE