Do You Really Know Loaded Carries?

It could be hard for people to believe, but I love keeping things simple. As I wrote about yesterday (you can read HERE), you can achieve so much and have a great deal of variety if you hold to 3 simple concepts (stance, load position, plane of motion). Those are important ideas in training most people ignore, I wish I could tell you why but I don’t know! The same can be said when it comes to a a relatively simple idea like loaded carries.

I started using loaded carries over 15 years ago when I got into Strongman training. Yes, the crazy people that lift giant stones, flip ridiculous tires, you know what I am talking about. Strongman was a sport I loved because it had a blend of endurance, strength, power, and planning. The strongest guy didn’t necessarily win (although it did give them an edge), there were other factors that came into play and most would be surprised how much strength-endurance would play a role like in events like loaded carries. 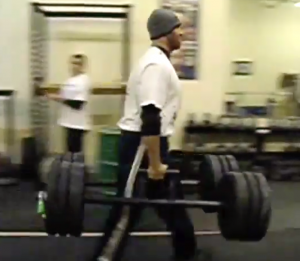 My days training up to 300 pounds per hand.

We HAD to do loaded carries because they were part of our sport, why would someone not crazy enough to take on these challenges want to use them though? Loaded carries CAN be an amazing way to train the core in more functional ways. Why?

I’ve written quite a bit that planks are a good core exercise, but they aren’t as functional as many people would think. That is because the whole purpose behind planking is NOT moving. Imagine if you walked down the street planking, you would look like a monster! The goal of real core training is knowing when and how much to brace the core as we move.

Most people don’t think of walking as a challenging activity, but it is! Over 60% of our time walking is on single leg and we have direction to our movement as well. When you combine that with the fact we have all sorts of little bouts of acceleration and deceleration, walking is a rather complex skill. That is why loaded carries have become popular for core training, if you can keep your posture and alignment while performing different types of loaded carries you can consider yourself as having good core strength. 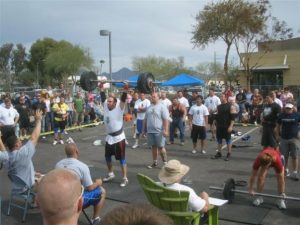 Even spinal expert, Dr. Stuart McGill has said, “Consider carrying exercises. We discovered the weakest link in the strength profile of many athletes is lateral core strength. This is required to hold the pelvis up or indeed lock the pelvis to the core, which is needed to run and cut quickly and skilfully or exert strength while moving on their legs. (In other words, this is needed by nearly every athlete who stands on their legs and moves.)

Upon foot plant, the spine and pelvis wants to collapse to the floor on the swing leg side. Lateral core strength creates stiffness so muscular explosive contraction around the hip propels the body without energy losses that rob performance. We train this strength beginning with the suitcase carry. Then the progression uses a kettlebell racked on the backside of the forearm with the fist at the chin. Then a bottoms-up kettlebell carry requires more focus on a stiffened core so that the lift position and bottom-up is not lost.”

I’d be all for these types of loaded carries, but something I have found over the years is that people miss TWO big concepts. One, people don’t often walk well. While we think that is impossible, so many knee, low back, and even shoulder issues can be traced back to problematic walking patterns. Secondly, how do we build up this lateral strength if we don’t already have it?

What most people DO NOT realize when they try to apply these concepts from Strongman is most of us got hurt! People forget that Strongman is a sport and sometimes you do things that aren’t healthy when you perform a sport, in fact, a study (you can read HERE) found 82% of Strongman competitors reported injury during training.

Here is a simple system of getting more out of your loaded carries while progressing your core strength in ways that make sense! No more are we going to have people leaning or compensating during their loaded carries, let’s get it right!

As I stated, walking is actually considered a complex human pattern. That is why in DVRT we look to build from a stable base to more complex movement concepts like lateral strength. You will see here with DVRT Master, Sean Lettero, how we build lateral strength that will enhance your functional strength in a progressive manner.

Step 2: Learn to Accelerate and Decelerate

This often doesn’t sound like something go to the gym wanting to achieve right? Who goes, “yea man, today is my acceleration and deceleration day!” However, it is the ability to do both possesses so many functional fitness concepts we value. Things like balance, injury resiliency, agility, and so on. When it comes to loaded carries, one of the great benefits to the competitions when you actually had to change direction and deal with forces that didn’t just move up and down.

One of my favorite way of teaching these skills is putting another direction of force to our exercises. The ARES sled is perfect for this and is a major reason I combine it with our Ultimate Sandbag drills. You must produce force up and down WHILE you resist forces coming laterally.

A drill we use in our DVRT programs to help people understand the importance of pushing down through the feet to press weight over head is our marching drills. At first glance they may not seem like much, but do them for 30-60 seconds and you start to really understand how to control your core by using the hands and feet. This is exactly what we need as we perform loaded carries because we want to walk at a good pace, not change our natural pattern just because we load our body.

When we aim for a rather “quick” pace, researchers found, “The farmers lift may have advantages over the conventional deadlift as an effective lifting alternative to generating more anterior-propulsive and vertical force with less apparent stress to the lumbar spine due to the more vertical trunk position. The farmers walk generated significantly higher vertical, anterior-propulsive and medial lateral forces in a characteristic gait pattern than unloaded walking. Such findings suggest that the farmers walk could prove to be an efficient mechanical stimulus to enhance various aspects of the gait cycle. Neuromuscular adaptations such as improvements in the production of anterior-propulsive forces, ankle strength and stability, lower body kinetic chain development, and core strength and stability may result from the inclusion of the farmers walk in resistance training programmes.”

In other words, if you walk quickly during loaded carries you get more force generation and more out of the whole lift. However, this takes more control and stability and where marches can really help build this stability!

Step 4: Use Many Patterns of Loaded Carries

Sadly in fitness we get a good idea and then we just stop! We stop thinking of how we can progress it and get more out of it. Loaded carries are no different as we often suffer from using just a few strategies when there really are no limits in ways we can progress these concepts to build core strength in new ways.

DVRT Master, Cory Cripe, shows how we can use a combination of lifts/chops and planks during walking patterns to create really effective and unusual loaded carries!

My hope is when you really go to understand WHY an exercise is good for you, you start to see a much bigger picture of functional fitness. How to build it, how to progress it, and how to have success with it. Some people may think this isn’t necessary in order to do loaded carries, but there is a difference between surviving and thriving with an exercise!