One of the coolest parts of becoming friends with such a eclectic group of health, strength, and fitness experts that you get hit with interesting things all the time. Like the other week when one of my sports science friends sent me an upcoming published study by National Strength & Conditioning Association on ACTUALLY Ultimate Sandbag Training.

I had no idea such a study was being done, but I was fascinated to see what was studied, how it was studied, and of course, what the results means for DVRT Ultimate Sandbag Training.

So, what was done?

There were four groups…

Obviously we are going to focus on the first three.

The running groups performed 16 minutes of continuous running at those intensities. The Ultimate Sandbag Training group worked for 8 minutes using a a 20 seconds on, 10 seconds off protocol. They performed three rounds of these circuits resting 2 minutes between the rounds of circuits.

To be honest, there were some things about this study that disappointed me. In the write-up they talked about looking to see the high intensity impact of Ultimate Sandbag Training, which they did. However, they didn’t directly compare it to any other form of metabolic strength training. Yet, we will address that as we do have some comparisons from the study.

So, what happened? Actually nothing very shocking. The running group actually burned more calories DURING the workout. That isn’t shocking because most people know that the benefits of high intensity training come AFTER the training with some research showing the continuous burning of calories of to 34 hours later!

At first glance you might find these results for the power of Ultimate Sandbag Training to be somewhat disappointing. However, if you delve deeper like renowned fitness expert, Alwyn Cosgrove, points out…
“The evidence (although perhaps not statistically significant) is that an EIGHT MINUTE Ultimate Sandbag protocol burned more(or at least the same) calories than a 16 minute treadmill workout at 60% and that an EIGHT MINUTE SB session burned 75% of the calories of a 16 mins session at 80%.”

That is crazy when you think about it that half the time of actual work with the Ultimate Sandbag caused 75% the work of very high intensity running. What would have been more interesting is to see if we kept measuring post-exercise energy expenditure how that would have played out.
If you are wondering about how this relates to losing body fat and so forth, you have to understand the landmark high intensity study from 1994.
“The mean estimated total energy cost of the ET program was 120.4 MJ, whereas the corresponding value for the HIIT program was 57.9 MJ. Despite its lower energy cost, the HIIT program induced a more pronounced reduction in subcutaneous adiposity compared with the ET program. When corrected for the energy cost of training, the decrease in the sum of six subcutaneous skinfolds induced by the HIIT program was ninefold greater than by the ET program.” (you can read more HERE)
Basically, the endurance group burned over double that of the high intensity group during the workout. Yet, not only did the high intensity group lose more body fat, they did so by NINE times than the endurance group.
While fat loss is always a big concern, people also wonder if there is going to be a cardiorespiratory effect because don’t we always hear you gotta do “cardio” not only for fat loss but health too? Well, here is the very interesting part? Researchers found…
“These data show that performing sandbag resistance exercise with Tabata intervals poses a significant cardiorespiratory stress similar to running at 80% of VO2R and provides superior energy expenditure during the post-exercise period.”
So you can get an incredible fat loss, strength, and cardio benefit from even short intervals of Ultimate Sandbag Training! That’s pretty cool. Now, what types of things would I have wanted to change? 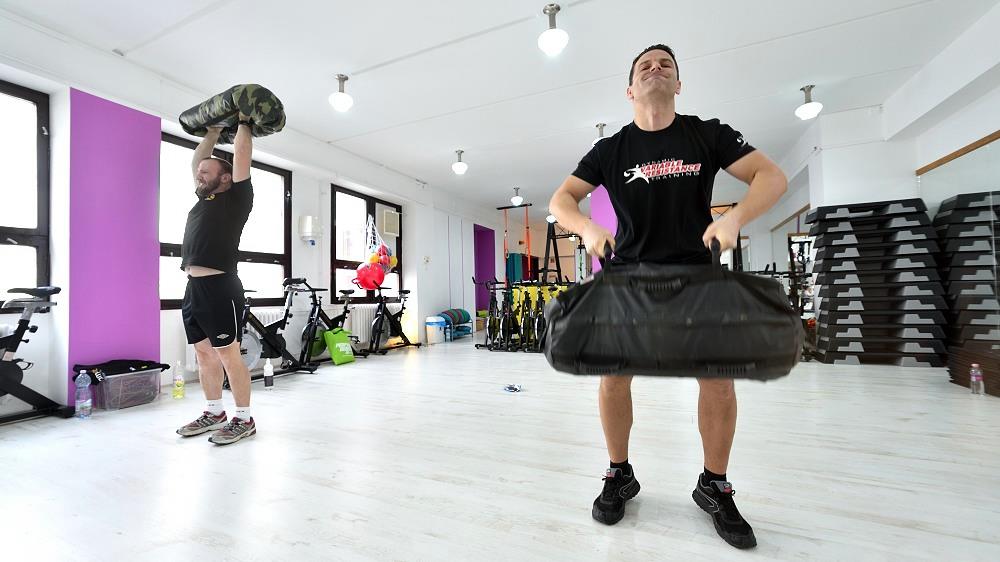 -Subjects were told to go “as fast as possible” on all Ultimate Sandbag Training exercises. However, we know from our gym labs that certain drills like Lateral Drags, Arc Presses, and even Front Loaded Squats actually are MORE intense if you slow them down. This would have been interested to see what would have happened if they had done son.
-An exercise like Rotational Deadlift wouldn’t been high on my list to use because it is both more technical and better slowed down.
-Shouldering should have been under the heavier category and Lateral Drags probably needed to be lighter to optimize.
-I would loved to have actually seen protocols like 30:30 used in such a study. While Tabata is suppose to be VERY high intensity, the problem is the technical component of these exercises. Since these people didn’t have a background with Ultimate Sandbags that played a role and would have impacted the intensity found.
-Comparing high intensity work to continuous training is good, but would have loved a direct comparison to other strength training metabolic training.
Imagine if we used DVRT principles and concepts how much MORE effective these circuits could have been. That is why we are going to give a great example from John Rhodes…
This week we have $100 off Physical Therapist, Jessica Bento’s DVRT Rx Shoulders, Knees, & Pelvic Control Course bundle HERE (no coupon needed). Don’t miss 25% on our Ultimate Sandbags, Online Certifications, & Workout programs with code “fall25” HERE