How This Turkish Get-up Makes Your Training Better

One of the exercises that I never thought would gain enough popularity where you might actually see it not only gyms, but in mainstream magazines is the Turkish Get-up. When I first saw the Turkish Get-up in 2002 I thought it was a really cool exercise and many of its components made so much sense. However, I also realized it was going to be difficult to get people to see it for the valuable core exercise that it was. That is because the Turkish Get-up wasn’t any of the typical abdominal exercises that people would be familiar with in their training. 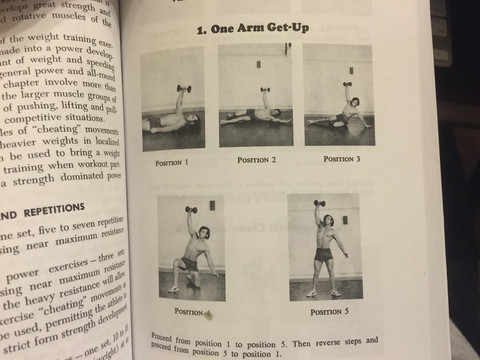 The old school Turkish Get-up was far less particular in its technique which didn’t let us see the full benefits of this great exercise.

When people say that the Turkish Get-up is a great core and shoulder stability exercise, they are correct, but not often for the reasons they think! In fact, so many people get the first important elements of the Turkish Get-up in correct that we never really get to reap the full benefits of the movement. So, how do we avoid these mistakes and achieve more in such a great drill?

First, we have to understand that the Turkish Get-up isn’t suppose to be a sit-up or crunch. One of the best benefits of the exercise is that we get to insert a rolling pattern into our strength training where most people have never heard or done much in the way of rolling patterns. Why should you care about rolling?

In this great article about rolling, we see that rolling is one of the best core stability drills we can teach people. It doesn’t look like what people typically think about when it comes to rolling, but because it requires reflexive control, full body integration, and very specific organization, it is a very powerful way to build stability.

“Rolling, as an adult motor skill, combines the use of the upper extremities, core, and lower extremities in a coordinated manner to move from one posture to another. Rolling is accomplished from prone to supine and supine to prone, although the method by which it is performed varies among adults. Assessment of rolling for both the ability to complete the task and bilateral symmetry may be beneficial for use with athletes who perform rotationally-biased sports such as golf, throwing, tennis, and twisting sports such as dance, gymnastics, and figure skating. Additionally, when used as intervention techniques, the rolling patterns have the ability to affect dysfunction of the upper quarter, core, and lower quarter. By applying proprioceptive neuromuscular facilitation (PNF) principles, the therapist may assist patients and clients who are unable to complete a rolling pattern.”-“Using Rolling to Develop Neuromuscular Control and Coordination of the Core and Extremities of Athletes”

DVRT Master, Cory Cripe explains how we do this correctly in our Turkish Get-up training and why the Ultimate Sandbag becomes a very important tool in this aspect of training.

Simply, most people load their Turkish Get-up too fast and forget important elements like rolling. The use of the Ultimate Sandbag helps us have a deliberate movement of our head that facilitates many of the essential elements of rolling patterns. As the physical therapists in the article above wrote about the impact of the head in rolling…

“When using rolling as an intervention, the upper extremity patterns make use of the fact that movements of the neck facilitate trunk motions or stated more simply, “where the eyes, head, and neck go, the trunk will follow.” By applying the proprioceptive neuromuscular facilitation (PNF) principle of irradiation (defined later in this article), the following can be utilized therapeutically: neck flexion facilitates trunk flexion, neck extension facilitates trunk extension, and full neck rotation facilitates lateral flexion of the trunk. Neck patterns can even be used to achieve irradiation into distal parts of the body, for example, neck extension can facilitate extension and abduction of the hip.”

In other words, a big reason people cheat the rolling benefits of the Turkish Get-up is that they lead with their head looking up at the weight overhead which causes their core to do more of a sit-up or crunch rather than roll. Not having the weight overhead and on the shoulder allows us to move the head properly, but still have great lateral stability on the core by the position of the weight. Trust me, I’ve seen people who can do Turkish Get-ups with very big weights overhead that struggle with 20 pounds on the shoulder because of how we make them not use their more typical flexion based core muscles.

What Cory shows so well, besides the technique involved, is how we build progression in the movement. The mistake I first made with teaching the Turkish Get-up was trying to teach the whole movement. The much BETTER strategy is to teach different parts of the Turkish Get-up and eventually put them together. So, we can work coming up to the elbow as Cory shows, but we can also teach other aspects.

Combining a half kneeling arc press with our leg threading allows us to work an important transition point of the Turkish Get-up that most struggle moving through. We can start with just getting people use to the half kneeling arc press (which builds overhead stability, mobility, and gives us more of that lateral strength training) and then slowly introduce the leg threading that gives us another important aspect of the movement. This can be done separately and allows people to train and slowly build the qualities to really benefit from the Turkish Get-up.

Our great DVRT coaches show how we can continue and problem solve many specific aspects of the Turkish Get-up so we can build success as well as results from the exercise. Most people have never seen such an exercise and those that have are excited about the idea of breaking it down into parts they can digest and more specifically focus upon. Then we can put those parts together as DVRT Master, James Newman helps me demonstrate.

Eventually we can not only build awesome Turkish Get-ups, but really total body integrate movements that train the whole body to move, perform, and look our best. Try this sequence once you built that strong foundation that Troy Anderson helps me show!