Two things that I was amazed by this week of fitness! Ironically the both had to do with squatting. Trying to explain to you that squats are good for you is about as useful as explaining so are vegetables. So, what got my attention?

One that really threw me for a loop was a coach in a gym talking about how they have “designated spots” to squat. I was like huh? How much more unnatural could you be than to tell people where specific lifts are performed? I get it, he had racks and other equipment set-up but it also told me how sterile and basically not free he saw functional movement.

We tell people that functional fitness is about transferring to real life, then we tell them exactly where they can move and they can only do so with certain equipment? That doesn’t make sense to me.

The other was the interest people have shown in landmine squats. Don’t get me wrong, unless you are hurting yourself, I don’t think an exercise is “bad”, I just always wonder how we can do things better! 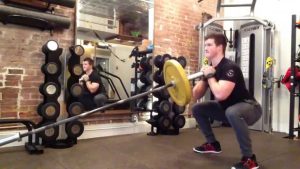 Of course I have to explain why I don’t jump at the landmine squat. After all, when this hits the internet people will say how I BASHED this type of squat. It isn’t the case, I am just kinda, “we can do better” idea.

How could I say such a thing when in the picture above the lifter looks like in a pretty good squat position. Well, I have a few reasons:)

For one, as a colleague of mine said, “it is kinda like a leg press.” I scratched my head for a second, but then I saw it. The angle and arc of the implement causes one to rely LESS on learning how to squat because they don’t learn to move their bodies as much as they just follow the arc.

The obvious leap people would make here is that a great squat in the landmine would transfer to a great squat in other ways. It kinda reminds me why I use a Suspended Supported Squat with recently injured individuals. Because of the support of the implement the nervous system doesn’t really learn to coordinate the movement well. That is why there always seems to be a “gap” in transferring people to other forms of the movement when using these tools this way.

With that in mind, it also has to do with questions I ask myself when I am doing anything, not just DVRT Ultimate Sandbag Training.

“What do I want my body to learn?”

“Is there a better way of doing this movement?”

“How does this tool bring something unique to teaching me what I want?”

This is VERY different than most people because let’s face it, they are just aiming for a “burn”. Now, that isn’t horrible, but what it does is not allow us to think deeper about our training. It doesn’t allow us to think of “better”, instead people just think of “different.”

An example is when people ask me if I do this or that exercise. I don’t say yes or no, I ask “why would I do that exercise?” They look at me funny because all they know is that THEY have been told it is good and “oh man, you really FEEL that!” I still don’t know what “THAT” is and I feel A LOT more stuff typically with what I am already doing. 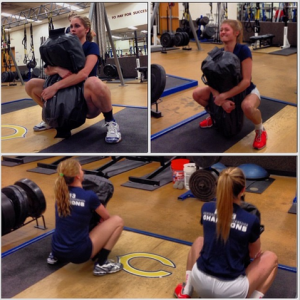 Want to “feel” your legs? Try to keep up with these college women’s athletes Bear Hug Squatting 100 pound plus Burly Ultimate Sandbags under the coaching of Coach Dos!

Teaching you how to engage with the ground

How do you integrate the lats, core, WITH the lower body

Do you have core stability to encourage better hip mobility

How is your ankle, knee, and hip mobility which tells us MORE about your real world strength and resiliency than your squat numbers

ALL of these things should be part of LEARNING from the squat, not just squatting. This helps give your training better direction, purpose, and results!

The fact your can’t integrate your lats and therefore your core in the most effective ways gives me pause at making this a staple in any program. That again, still doesn’t make it “bad” or “dangerous”. You want to ask yourself the RIGHT questions though!

Don’t ask “is this a good exercise”, ask, “how do I personally benefit from this exercise.” This becomes so much more free in your training and you don’t have to fight the current BIGGEST problem in fitness, fear of missing out (FOMO)! Let go of FOMO and watch how consistent you can build results!