The goblet squat has exceeded anything that I thought it could become. When I first learned about the goblet squat over 20 years ago, I though it was a “nice” way to introduce people to squatting. Over time, I found it more and more useful, but also found how many people weren’t really getting the point of the exercise. 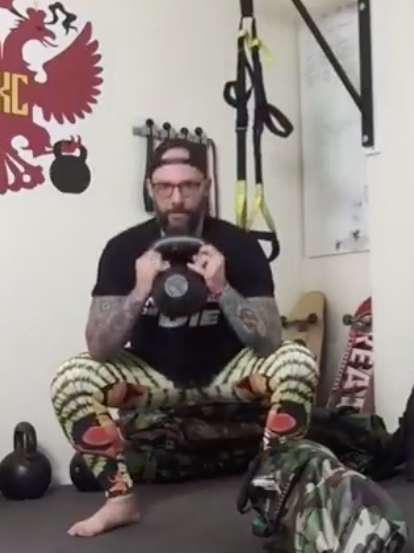 Strength coach, Dan John, popularized the idea of the goblet squat. He was working with high school athletes and most didn’t have the coordination or strength to barbell front squat properly. Since Coach John wanted to have many of his athletes Olympic lift, you could see learning how to do a barbell front squat was really important.

The goblet squat seemed to be the perfect answer, but kettlebells were still in their infancy stage coming back to fitness. Therefore, Coach John used dumbbells initially but then became a big fan of performing goblet squats with a kettlebell. This became more and more popular as kettlebells became more accessible.

Fast forward, the goblet position is used for step-ups, lunges, and yes squats. Basically anything to load people in the front and use more core while sparing the low back. What is the point of this post then? Over time I found people missing three key elements in truly appreciating what goblet squats could do and the right way to maximize their benefits.

Sometimes people think I am too hard about the Ultimate Sandbag being a better tool for specific exercises. However, I am like that about EVERY strength training tool. After all, they are not only ways to challenge a movement, but should be assistant coaches in teaching HOW to perform a movement. People miss this BIG time when it comes to choosing a kettlebell or dumbbell for goblet squats.

Unlike the dumbbell, with the kettlebell we can create specific tension to enhance the connection of our core to our entire body and allowing us to get better hip mobility in the exercise. While the weight and being in front of our body does make the dumbbell better for many people, the kettlebell makes it FAR superior when you use it with the right intent.

In case you were wondering, this also makes the landmine a relatively poor drill to create this transfer to more free weight movements. The angles and the leverage create too much artificial stability to have positive transfer to greater movements like we are laying out.

I see it all the time, people in the goblet position but with REALLY tiny weights. Of course we want to use a weight appropriate to the individual, but we also have to realize that if we use the whole body we shouldn’t be using tiny weights. 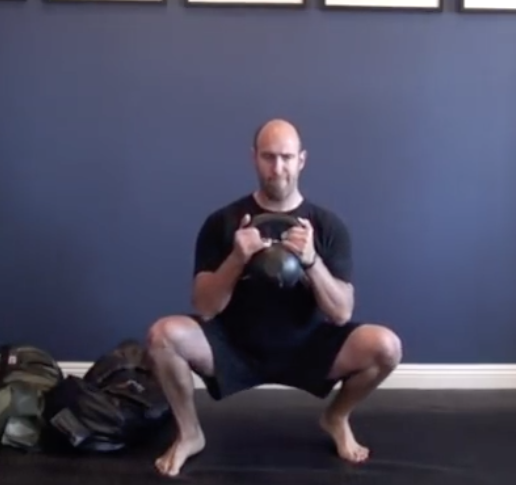 Using the right load and grip allows us to develop stability and mobility not only in the classic goblet squat, but the more complex sprinter squat as well!

Creating proper tension and having enough load is what allows us to go into greater ranges of motion and have better feedback in our goblet squats. When you still see sloppily performed goblet squats you know they are typically not creating the right tension, nor are they using enough weight. Remember, the right tool and weight are important teachers of better movement.

Coach John never intended goblet squats to become a maximal effort squat. The goal was to develop enough movement awareness, core and whole body strength to move onto the barbell. So, you can imagine how interesting it is that people only attack squats by just going heavier and heavier in the same position. This obviously becomes an issue in goblet squats because more are limited by what they can hold in the position.

It is the number 1 reason to focus on movement and not exercises. It’s been funny to watch some attach the #kettlebell goblet squat because the limiting factor is the arms. These people jump to kettlebell #squats can’t make you strong because you can’t load them enough, that’s silly! ——————- 💡 By changing how we use the load we can still load the squat a lot but even more importantly keep the integration of the core and mobility of the hips. The goblet squat wasn’t meant to be a world record squat, but to de the foundation for other squats! A great example is moving to double kettlebell squats which overload the squat more! Then we can progressively move to off-set kettlebell squats which use different weights to challenge the ability to resist motion. How we take a sagittal plane exercise and make it more multi-planar and challenging the #glutes and core to higher levels! —————- 💡 Don’t get stuck on exercises you will be prone to bad advice and missing the benefits of thinking much bigger!

Instead of trying to do novel positioning of the weight, functional training tools like kettlebells offer us the ability to change our load position and stance. In following progressions I break down below help us see that it is easy to keep building strength in the squat without having to sacrifice our quality of movement, low backs, or get into “funky” and awkward holding positions.

Using smarter strategies like these allow us to get so much more out of our functional fitness AND the tools we have to maximize them. The idea of how to get more with less rings at the heart of our DVRT system! 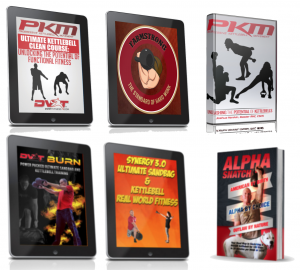