When something looks TOTALLY different than anything you have ever seen before, it is easy to simply write it off as “weird” or “circus trick”. Those may be true in this day and age of social media, but for me, the test is if you can explain simply what makes the exercise special or something you just made up? That is often what happens with this DVRT core exercise that people often have no idea what to make of it.

I came up with the Around the Worlds after going through some of John Jesse’s “Wrestling Physical Conditioning Encyclopedia”. This book from the 70’s is packed full of interesting nuggets from professor Jesse, a book that many think Crossfit was based off to some level (you can see some influences for sure). It was particularly of great interest to me because at the time there was so little written about using sandbags in fitness programs. Mr. Jesse’s had probably the biggest discussion on sandbags that I had found in all my research. 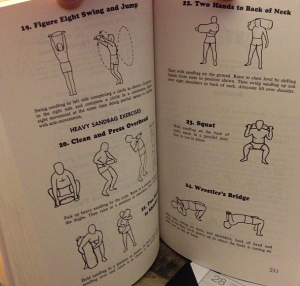 In the book (you can even see in the top left drawing) there was quite a bit of circular movements recommended to perform with the sandbag. I was already familiar with Indian clubs that used a lot of the same mentality of circular patterning for strength (something you see so little today) and I was intrigued. That was because it made sense that we had structures like our shoulders and hips that were designed for all this 3D movement, but we largely only trained them in linear ways, along with the science that help us understand better today.

Circular patterns actually work really well for our mobility and strength because our body is actually designed to almost be like one big top (you know those toys you would spin, probably dated reference). This circular type of design is really represented in what is known as the “serape effect”. What is that?

In the great scientific paper by some industry heavy hitters, “Anterior and Posterior Serape: The Rotational Core”, the serape effect is explained as the following…

“However, the core stiffness is tuned with the appropriate muscle activity to best enhance the storage and recovery of elastic energy similar to an elastic band. Using the anterior serape (i.e., right shoulder to left hip), the core’s bigger mass “pulls” on the lighter right arm of the pitcher, much like a hand pulls on a whip. Hip rotation is accelerated in a counterclockwise direction by the extension of the left leg (i.e., driv- ing the left hip back) as the right hip continues its forward trajectory (Figure 1D). The acceleration phase is complete as the ball is released and the “follow through” phase begins (Figure 1E). The follow through phase is decelerated by the posterior serape that goes from the left gas- trocnemius muscle to the right latissimus.” 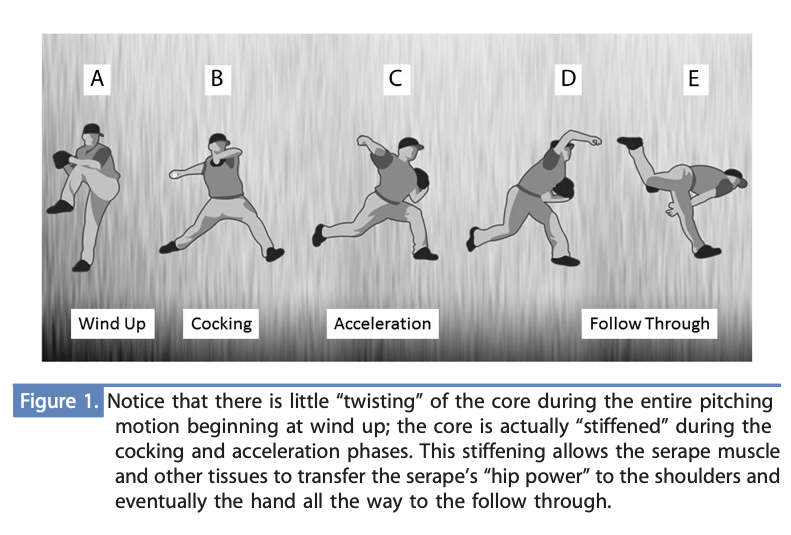 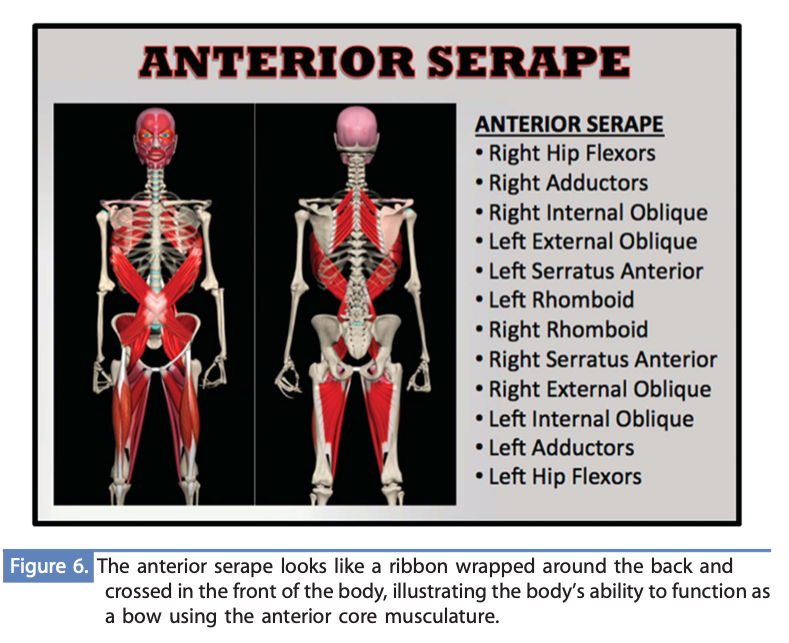 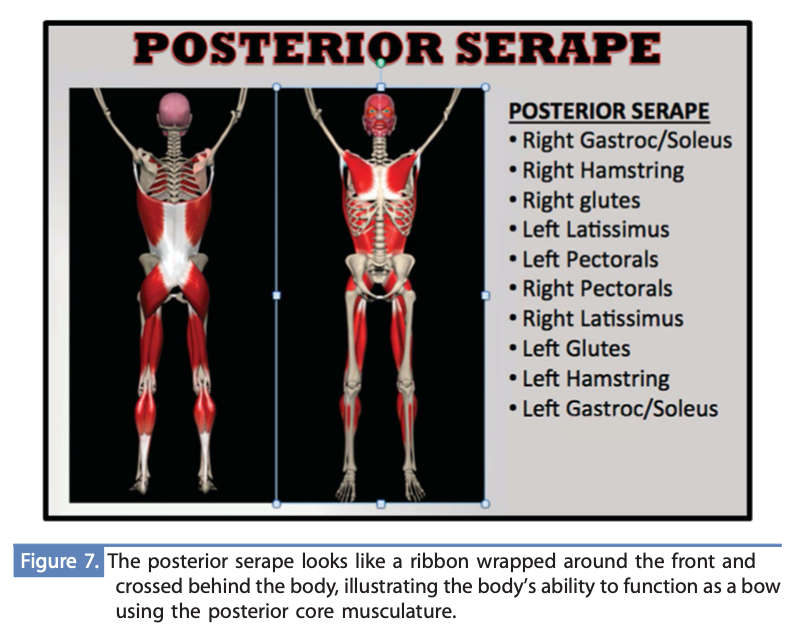 Sometimes even with a good analogy like throwing a ball, people still don’t get how concepts like the serape effect help their fitness goals. Especially if they just want to be strong, look better, or build muscle. Well, for one, as you can see in the diagrams above, you are going to train MORE muscles with these types of exercises than you ever would with an attempt of muscle isolation in any core exercise. Plus, you can see why a core exercise would be almost silly to try to isolate muscles when our body is so interconnected.

Not only is training a core exercise that focuses on developing these qualities really help our strength and train a lot of muscles, it can great help our mobility. Teaching the core to create proximal stability at the right moment while we are moving our extremities like shoulders and hips allows them to gain more range of motion. 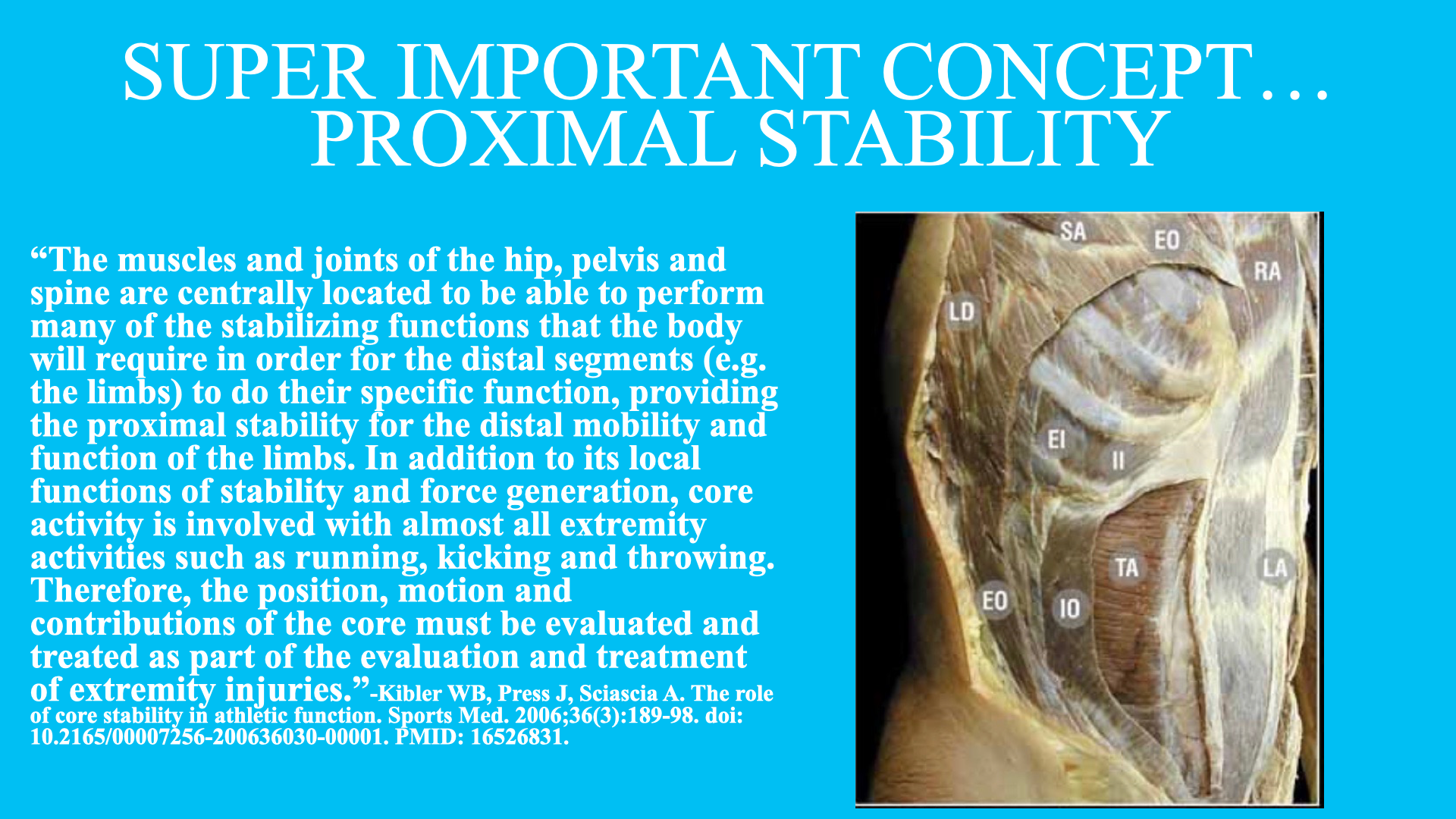 This is where our DVRT Around the World can be such an amazing core exercise because it satisfies EVERYTHING we have been talking about. The key though is to understand what is and is not happening during the drill. The weight is NOT moved really by the upper body, it is more directed as we create force from the ground up really teaching what a good core exercise should begin with.

Working from a tall or half kneeling position is a great way to help someone understand that we need to control our core/pelvis as our core also reacts to a weight moving and trying to throw our body off balance. Learning to RESIST movement first in a more stable environment will help us then move to the other higher levels of Around the Worlds.

Moving into rotation is an amazing way to build any core exercise, except people often misunderstand even how to create rotation in the first place. Using the rotational version of the Around the World really helps us appreciate the impact of the serape effect. Even though it looks fluid and almost easy that is from coordinating the body at a much higher level. Such a core exercise is a far better representation of what is meant by functional fitness.

Even higher levels of the Around the World come back to where we are resisting rotation, but doing so in less stable environments and in more dynamic lower body movements. We really raise the level of the core exercise and combine elements of stability, mobility, and strength all at the same time. You can now see that such DVRT exercises help the shoulders, but not by lifting the weight WITH the shoulders, but by teaching the movement skills that usually negatively impact the shoulders. With the hips we get such an incredible hip mobility/stability exercise because of the movement coming from the ground up, but also the stability that the core is giving to the hips from the top down. Understanding how our bodies are designed to function, we not only can develop an awesome core exercise like the Around the World, but it makes so much more sense in how we can create effective training solutions so much faster!

Find out more with our DVRT Online Education Sale! Save 25% on DVRT Level 1 or Restoration Certification and also get a FREE Power Ultimate Sandbag. You can save the same on our PKM certification and get a FREE 12kg (26 pound kettlebell). Of course you can also save 25% on our totally integrated functional training system L.I.F.T and get 2 FREE Ultimate Sandbags (FREE items only for US domestic customers only , excludes HI, AK, PR, and GU, please contact us for more info). Just use code “online” HERE for this week only!