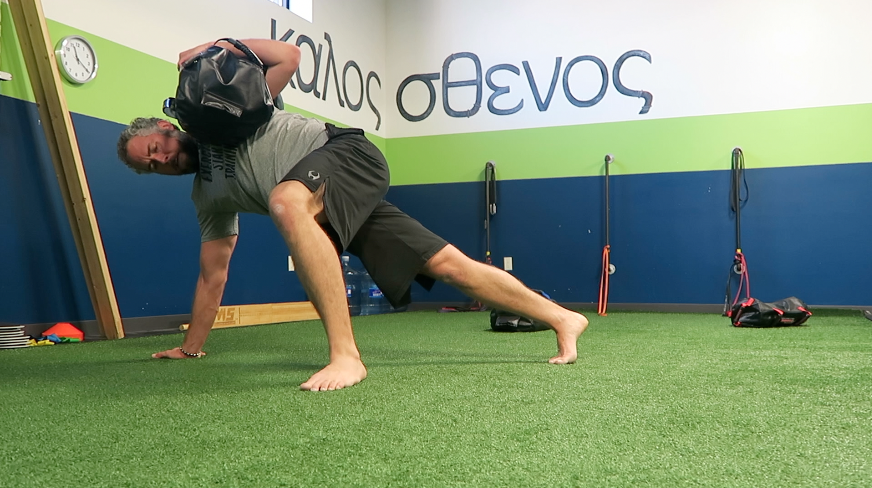 It wasn’t long ago that my favorite anti-rotational core exercise movement “go-to” was the Kettlebell Halo exercise. The ability for the body to resist the movement of the kettlebell was important for quality core training … or so I thought …

‘What do you mean, or so I thought, is the halo with the kettlebell a “bad” exercise?’ It’s definitely unfair to categorize exercises as good or bad and our fitness deserves so much better! What we should strive for is to seek not a good or bad exercise – but the BEST exercise with the BEST tool! That is why my thought process of the best core exercise wasn’t about “good or bad”, but what was better.

If you have a screw without a screwdriver, but you do have a hammer – would it be effective to pound the screw with the hammer? Sure. However, is it the best method? Probably not.

Now back to the halo exercise. Even though I have pretty healthy shoulders with good mobility, I kept finding that I would leave the halos with achy shoulders, but I kept hammering at them because I appreciated the anti-rotational component of the core exercise. Then I discovered the DVRT Around the Worlds using The Ultimate Sandbag and I felt like a little kid on Christmas Morning! 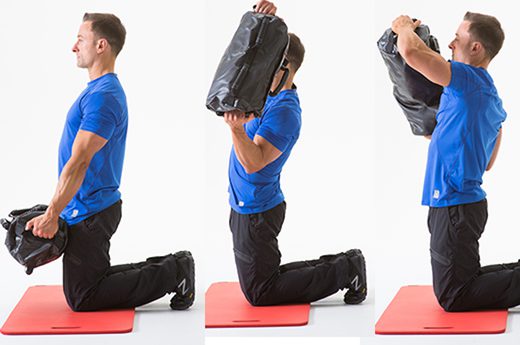 I don’t think it takes a rocket scientist to realize the handle on the kettlebell is rather narrow and restricts the shoulders’ range of motion. Now when you look at the dimensions of the Ultimate Sandbag and where the handles are located, it’s pretty obvious how this tool will allow for greater movement through the shoulders. Not only will the USB give more freedom to the shoulders’ movement, but it will be even more effective as an anti-rotational core exercise.

People often look at the DVRT Around the Worlds and because they see the arms moving the USB around, they believe it to be an arm & shoulder exercise – just like the halos! But, like everything else that comes from DVRT Land, it’s such a core dominant drill that the arms and shoulders should be an afterthought. Let me explain …

The halo exercise using the kettlebell initiates from the shoulders, but the core is not responsible for the movement of the kettlebell – only to comply with the task of not moving the hips. Whereas performing the Around the World, the intent begins from the ground with your feet, travels through the core, and is made present through the movement in the shoulders. Without an efficient core, this movement may not work – or best case scenario, it doesn’t look very smooth and fluid. What makes the Around the World such a power house core exercise is the combination of a lift/chop with a plank, pretty cool right?!

It can be known right away if you’re making this an arm & shoulder exercise or a core experience. Even though the USB is rising up … what are your shoulders doing? If you feel/see your shoulders dropping down as the USB rises up – hello core muscles! However, if your shoulders are rising with the USB – file this as something you’d do on shoulder/trap day and expect some achy shoulders down the road! Let’s not let that happen, let’s get some help by thinking about soda pop!

What?!?! All right – it doesn’t need to be a soft drink, any carbonated beverage will do. Lately I’ve been using a cue that has helped our clients at Fitness Lying Down better understand the core stiffness necessary to make the Around the Worlds super efficient & effective!

Picture a bottle of whatever carbonated beverage you desire. Now the cap is sealed on top keeping the pressure of the liquid constant, but – as we all know – once that cap is twisted off and the seal is broken, their is a gradual loss of pressure and the stiffness of the once-sealed bottle no longer exists.

Now imagine you’re that bottle! With your feet plugged into the ground, the stage is set for your core muscles to be the primary movers. However, if your shoulders rise with the USB, you have twisted off the bottle cap and the pressure/stiffness is lost in the core. BUT – as the USB lifts up and you can successfully keep the shoulders pushed down during the entire 360° of this movement then your cap remains sealed and your beverage stays fresh and carbonated with a super-stiff core! HOORAY!

If you continue to struggle putting this together then there are options to help you build into the Around the Worlds. One of my favorites are the DVRT Dead Bugs with a lift & chop movement. Once that has been mastered taking your Dead Bugs and flipping them over to experience the DVRT Bird Dog drags would be the next progression. And finally, being in a half-kneeling position while doing Arc Presses will provide the opportunity for the core to play in an upright position – preparing you for the next step … Around the Worlds!

The best part is that working through these progressions simply leads us to performing more complex versions of Around the Worlds. That is what I love most about DVRT, is that there is this never ending journey of functional fitness you can continue to go down when you understand the principles of the system. The endless number of exercises are simply based upon owning the foundations and adding layer upon layer. Now, THAT is what smart strength training is all about!