One of our most controversial and popular blogs has been about something relatively simple, the Sprinter Stance position. Why does something so small create such a polarizing impact on people. Why do these Ultimate Sandbag exercises seem to get people thinking so much?

Many have fallen into the odd fitness trap of, “well, that isn’t new, it has all been done before.” To me, I think the keys aren’t if something has been done before, but asking the question, “if it has been before and it is so good, then why aren’t we doing it now?” A question we always ask about our own Ultimate Sandbag exercises. However, the answers to such questions can only result in a few things…..

“We know about it and just don’t think it works that well.”

“Ooops, we just flat out forgot!”

Personally, more times than not, I believe it is the former. We know about these things, but heck, we just don’t think that much about them. That is because people haven’t put them in context or system that makes sense as a solution to our needs. Hopefully understanding how these Ultimate Sandbag exercise are different will inspire you to think differently too!

The Sprinter Stance is a great example. If we look at the history of squatting and exercise, the modern squat isn’t what people were doing for the most part. Legendary Strength Coach, Mike Boyle, does a masterful job of dropping some serious lifting history and knowledge in this regards. Here is referencing material from a 1922 issue of Strength magazine.

“You may not be able to read the fine print; the top caption says, “Squatting on one leg will do more for you than squatting on the two legs together.”

Interestingly, the bottom caption says, “Just a variation of the same exercise as illustrated by the photo above.” So in 1922, the bilateral squat was “just a variation” of the single-leg squat.

The exercises didn’t evolve, but the industry did.

We grew up in a strength and conditioning world dominated by bodybuilders, powerlifters, and Olympic lifters – all lifters for whom double-leg training makes perfect sense. Team sport athletes are not the same as strength-sport athletes, not by a long shot. So why argue that they should train the same?

If you’re an athlete or are involved in training them, it behooves you to drop the bodybuilding and powerlifting emphasis and start targeting the athlete’s true needs. Incorporating single-leg movements in place of bilateral movements is a great place to start.”

You might be surprised to hear that I knew about this picture and it is a “Sprinter Stance Squat”. So, why do I say that it is unique to our DVRT Ultimate Sandbag Training system? Well, for one, the way we apply it. I whole heartedly agree with Coach Boyle that most should emphasize one legged squats over two. HOWEVER, in our current fitness landscape, most don’t have the strength, stability, and mobility to jump into doing just that.

While some were busy trying to argue we didn’t invent the Sprinter Stance (um, which is true, we didn’t) we did systemize it in a way where it works better for you. Here are a few examples…..

Squatting: When you introduce the Sprinter Stance into a squatting series you want to take your standard squat position and slightly move one foot back so there is a heel to toe relationship. You DO NOT want to bring your feet together right off the bat! That is because if you lack hip, knee, or ankle mobility, you will be loading your knees in a dangerous manner! 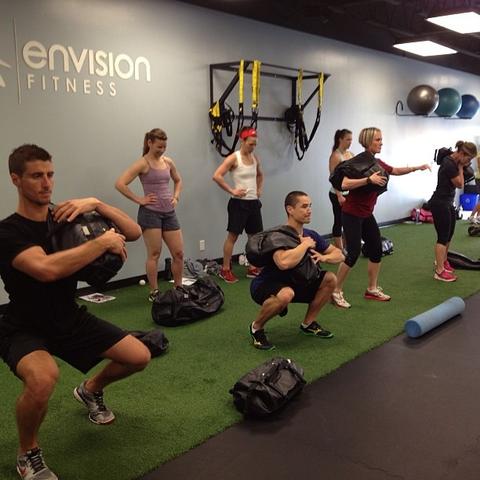 So, your Sprinter Stance Squat should look very similar to your standard squat. Over time, as you build strength and mobility, you can bring the stance in to create a more challenging environment.

Deadlifting, Press, and ooooh, just about everything else!

Due to the movement of these types of drills we aren’t going to take the wide stance we will initially see in the squat. Instead, we will take our typical deadlift, pressing, rowing, you name it stance and just slightly move one foot back to heel to toe.

THIS IS THE BIG PART AND WHY I AM TYPING IN ALL CAPS! When you plant the back foot in any Sprinter Stance the rear heel MUST be elevated and ALL toes must be in contact with the ground placing force through the ball of foot. You will see all types of compensations here with people turning out their foot, stepping out to the side, and so forth. These are all subtle ways and bad ways of trying to build stability. Have someone watch you, or heck, use a mirror, but make sure your alignment is right!

When it comes to apply force into the ground, you should see BOTH feet very active. I always tell people you want to see a crease in the back foot. The best way of thinking about it is a 60% in the lead leg and 40% in the back foot balance.

Once you get this down, not only does it allow you to be more successful in getting results, but it moves you down the line in our movement continuum. Where a lot of the “haters” go wrong is that those that say the use this all the time don’t, because the Sprinter Stance is JUST a progression of our long term training. Tomorrow I’ll show you what I mean as we move through WHERE Sprinter Stance can take you!

Love to get the edge in fitness? Then don’t miss our upcoming DVRT Ultimate Sandbag Training courses HERE