It was around 1998 and I was just blown away! I had never thought of training in this manner, it was a whole new way of thinking about strength training. At this point I had been training for years and was working in the Strength & Conditioning department of Arizona State University as an intern. In other words, I had been around strength training for some time so to have something really shake up my world says a lot and yet it was something so simple. Training of a movement pattern versus exercises and muscles!!!

This was the time that functional training was really starting to get into the fitness arena. Functional training was born in rehab circles so getting to fitness was something else, especially when it was forcing us to think so differently. Really, wants the difference of training a movement pattern versus just “good” strength training?

Probably the biggest difference is that it helps our training programs be more balanced. So many times, even today, I see severely unbalanced training programs. Before we can even go into why or the differences we should define what we are talking about in regards to a movement pattern.

What shook my world in 1998 was Paul Chek’s “Primal Movement Patterns”. Mr. Chek laid forth the idea of not training muscles or exercises, but thinking about this thing called a movement pattern. It included:

What that helped us appreciate was several concepts that would help to really define what functional training means. For one, that our body is totally connected! The more and more we are learning about fascia in today’s landscape, the more we see HOW the body is connected.

(warning: the below video on fascia is graphic in some parts, human cadaver is shown)

If we want to be strong in AND out of the gym we have to train the body as it is designed to move. Trying to isolate muscles really goes against our body’s most fundamental design. It also negates that our nervous system plays a HUGE role in how we perform.

With all that in mind our industry has gotten better at recognizing that movement pattern training should dominate our training. Not only do we make our body smarter, we actually train MORE muscles than trying to isolate alone! Research has shown that training in this manner will not only create similar cosmetic changes in our body, but results in making us much stronger too, good deal right?

Of course with all new ideas (really 20 years isn’t that long) there is some misunderstanding about what movement patterns we are actually looking to train. For example, spine specialist, Dr. Stuart McGill recommends the following…

Very similar to Mr. Chek’s but Dr. McGill includes balance which opens up a whole different discussion. My point though is that we might go more than 7 patterns, but oddly some professionals have been going less! Here is the problem, you can’t ignore the movement pattern list that we have created doesn’t include the foundations of human movement. Taking some off a list doesn’t mean they don’t exist.

Then we have the issue that people still confuse an exercise for a movement pattern. For example, for over ten years I have used the example at our DVRT courses that “a deadlift is a hip hinge, a hip hinge doesn’t have to be a deadlift” (DVRT Master, Cory Cripe shows some examples). The same can be said of the MOST misunderstood movement pattern, gait!

Performing the DVRT #hiphinge on the right with an 80 pound #ultimatesandbag requires lots of #corestrength and this doesn’t happen overnight! . . . That’s the magic of #dvrt ????????‍♂️The systematic steps to climb in order to find your better and move forward. But you have to earn that next progression, it won’t be handed to you! @ultimatesandbag #lacrossewi #dvrtdad #dvrtstrong #sandbagtraining #functionaltraining #hiitworkout #crossfit #performbetter #fitpro #coreworkout #gluteworkout #inspiretobebetter @perform_better

The idea of gait has turned into people misunderstanding that gait means carries. Exercises like Farmer’s walks, Bear Hug carries, and more are exercises under the umbrella of the gait movement pattern. 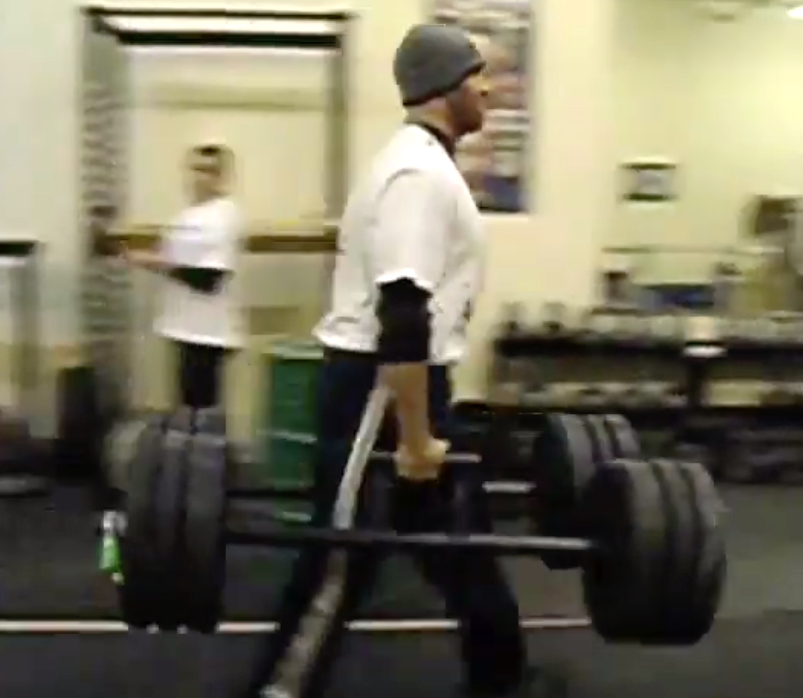 Gait is actually the most complex of all the movement patterns and as such needs to be thought of as progressive as we would be breaking down someone’s squat or deadlift. Unfortunately, most people actually don’t know the science of how we walk. I know, we put one foot in front of the other, but actually it is quite a bit more complex. Heck, whole laboratories in exercise physiology departments are set-up to look at how people walk. 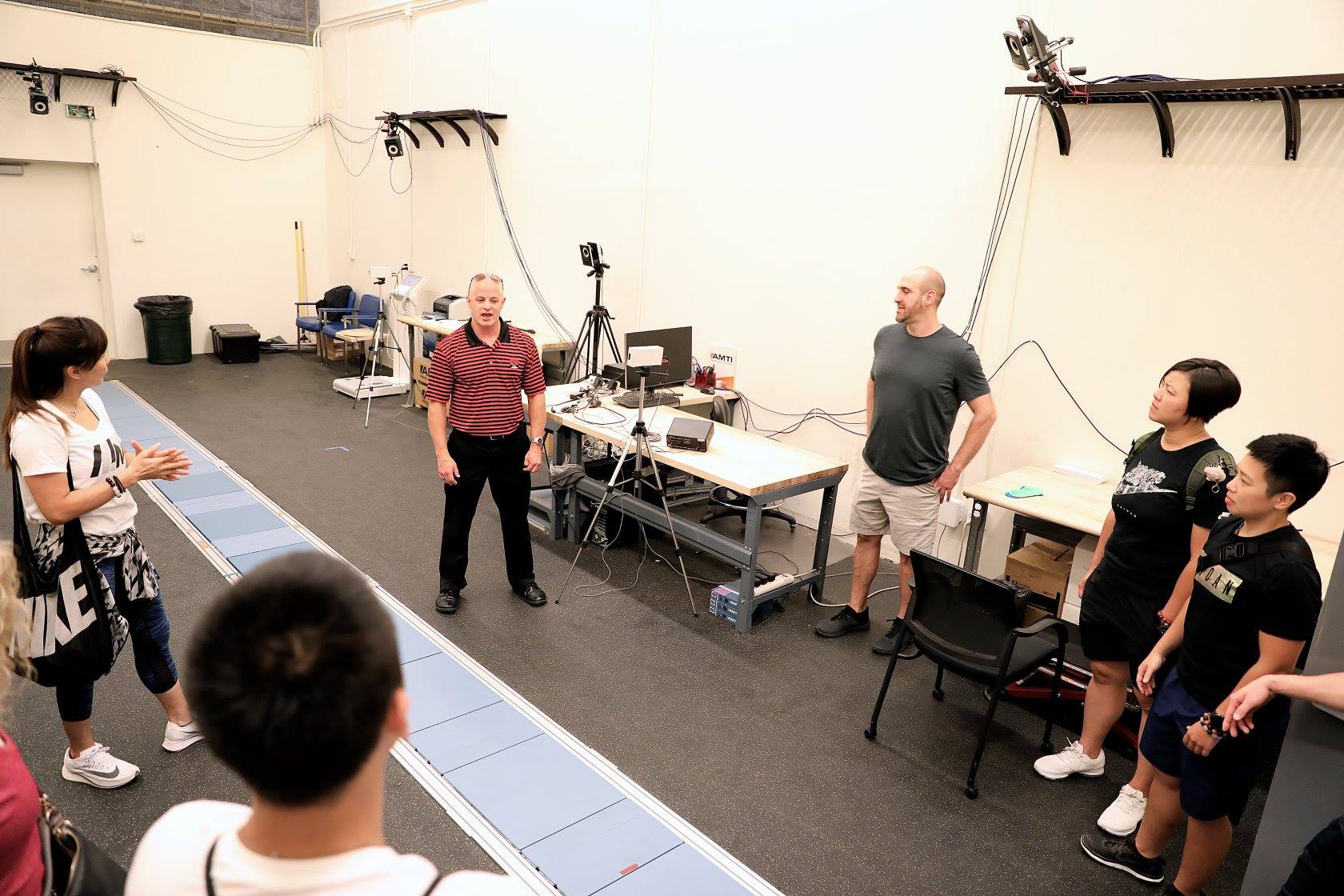 It was awesome to see one of these labs at UNLV with Dr. Brian Schilling!

Does this mean you need your PhD in biomechanics to help train the movement pattern of gait? No, but we have to understand there is more than gait training than carries. So, like the deadlift example, carries are an exercise for gait, gait training doesn’t have to be carries.

Where do you start?

Dead Bugs are a great example of using foundational training to build the gait pattern. The classic Dead Bug has us laying on the ground and slowly extending one arm and leg while trying to keep the pelvis “quiet”. It is our first introduction to some of the qualities of gait.

Bird Dogs can be considered the next layer with again, opposite arm/leg movement with trying to keep the pelvis stable. Holding more of our body weight, this is a more challenging form of the movement pattern of gait.

While we could make a case for side plank work to help stabilize our body from side to side which makes up a big part of the movement pattern of gait, I wanted to go to one of my favorites. The step-up! Usually not seen as the super hero it really is, the step-up done correctly possesses many of the qualities that make us appreciate the challenging movement pattern that gait really is all about!

Once we spend on these types of movements along with lunges and the other movement patterns described we can eventually move to carries. All too often people don’t appreciate the complexity behind doing carries well! They result in not only poorly performed loaded carries but taking an exercise that is suppose to be helpful to the low back and make the back MUCH worse! If we don’t have the strength and stability that is how we create injury.

The point of understanding these foundational principles of functional training is not to just give you more exercises, but help you determine the RIGHT exercises!

Don’t miss the last few days to save 30% on our Force, Power, & Core Ultimate Sandbags and get our DVRT Pelvic Control Course for FREE when you use coupon code “vday” HERE