I’ll be honest, posting and interacting on social media gives me some of the best ideas for posts to make here. That is because I get to hear the beliefs that certain coaches have about training out loud. For example, many coaches get VERY upset when I explain why a barbell hip thrust is NOT an awesome glute exercise.

Sure, they can actually get behind my explanation about how because the barbell hip thrust doesn’t provide knee extension (like a deadlift for example would) during hip extension, or how the lats/core aren’t involved so we don’t likely dramatically improve the function of the glutes. They still argue the value of this glute exercise for as great for hypertrophy (muscle growth) of the glutes. 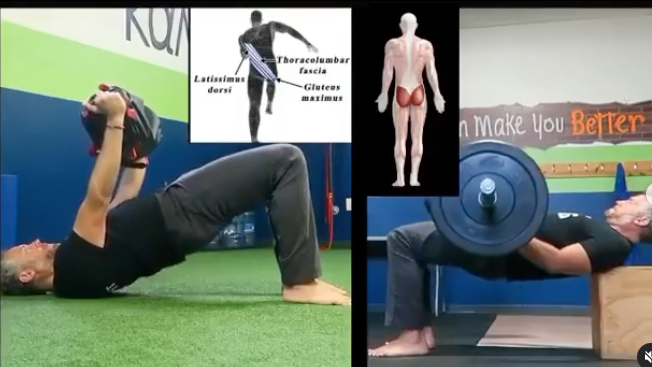 Well, I’m not going to sit here and tell you that barbell hip thrusts won’t increase any gluteal hypertrophy, that wouldn’t be honest of me. However, is it amazing for such goals?

For one, I don’t know believe you can separate cosmetic and functional goals completely. That is because if we create dysfunction in our goal of building more muscle, then you will inevitably have your goals derailed because of pain or issues that such training creates. For example, because the core and lats aren’t involved very much in a barbell hip thrust glute exercise, we can get what are called shear forces upon the SI joint.

One of the reasons that the glutes work with the thoracolumbar fascia and opposing lat is to create what is known as “force closure” upon the SI joint. That means the muscles create stability in the joint reducing the stress and how the stress is absorbed by the area. That also means when we do NOT integrate the body in this manner we are exposing the body to more negative forces and therefor can increase the likelihood of having low back pain. How much hypertrophy do you think one can achieve when they are in pain?

Above I demonstrate how and why creating this force closure both protects our back and improves our gluteal strength.

However, shockingly, no matter how much I may explain this concept to people they still want to argue that barbell hip thrusts are necessary and good as a glute exercise for building great hypertrophy. What I start to think about is what is this point of view based upon exactly? Is it just a matter of load?

Well, you see there is a BIG problem if THAT is our assumption. If you look at research like that above, you actually see that a single leg good morning well outperformed a two legged good morning with more weight in being a higher level glute exercise. So, if we are basing our opinions just off load, we may be making a HUGE mistake in knowing what actually works!

Is there anymore evidence that though that the barbell hip thrust may not be the very best of the glute exercises? Well, there was a    paper that performed an extensive literature review, “Gluteus Maximus Activation during Common Strength and Hypertrophy
Exercises: A Systematic Review” and found that the glute exercise that stimulated the glutes the MOST wasn’t the barbell hip thrust, rather, it was the step-up!!!

Not just step-ups but pretty much all variations of them! We can also see that an exercise like a split squat had just as high gluteal activity but we get SO much more out of them. The point being, when we add an exercise into our program we have to say no to another movement. So, not only do we want exercises that can activate a lot of muscles, but build qualities like power, stability, as well as connecting our body more efficiently. When you consider how many lower body exercises would go ahead of a barbell hip thrust and the risks involved, why are we prioritizing them so much?

Instead, think of making step-ups like these that coaches Robin Paget, Alwyn Cosgrove, and Greg Perlaki show the cornerstone of the glute training you perform!

Save 30% ALL Throughout Our DVRT with our Ultimate Sandbags/Water Bags, Online Certifications/Courses, & DVRT Workouts with code “labor” HERE