The Smarter Way to Squat

There has been a really cool recent movement to make physical therapy and fitness not just work together, but to have a seamless bridge. After all, it should make sense, the goal of both SHOULD be to move better!

If we can agree this should be the goal, then we have to ask ourselves, “are there better methods, programs, and exercises than others.” We often have that approach with physical therapy. Examining where the persons current needs are, how they move specifically, and what may be causing their issues is how we start to determine a plan of action.

Sounds like it would work well in fitness too, right? However, I do get a bit frustrated when I don’t see that happening in fitness, rather, that every exercise is on the table and nothing is really better than another.

Maybe I come at things a bit differently because my background is to try to get people out of pain and do our best not to get them back there again. That’s why I see EVERYTHING as a scale or risk versus reward. While that may make me sound like “no fun”, I was happy to hear in a recent interview that renown spinal expert, Dr. Stuart McGill, pretty much the same thing.

“Exercises are tools to get specific jobs done. The way an exercise is performed depends on the rationale for choosing that exercise. First, list the objective and then decide on the best tool. Usually the best exercise is the one that creates the largest effect with the minimal risk to the joints. If the purpose is to create hip extension power, then exercises such as weighted carries and sled drags have to be considered.”

Yes, that goes for DVRT Ultimate Sandbag Training as well. I love that our philosophy is that “you don’t have to do every exercise, you have to do the RIGHT exercise.” Of course, this means you have to know your body and your history. Having over a decade of practice though and see everything from athletes to elderly. I feel like I can make some strong generalizations.

One comes in the form of squatting. I believe largely in what Dr. McGill stated above, how can we build a large effect with minimal risk? After all, the benefits of squatting are wide from building a functional movement patterns, creating great overall strength, and examining mobility. Which then drives me nuts to what I see all the time.

That is people back squatting!!!! YES! That includes back squatting Ultimate Sandbag. Now, you might think a weird stand as isn’t this what we think fitness should be and we should work towards? The classic back squat?

First off, it is important to know that the idea of the back squat is probably less than 100 years old. At least in the way we think of it now. Partly this was due to availability of metal, some of it was due to lack of things like squat racks.

Now, you will find impressive feats by people like Henry Steinborn (who ended up squatting over 500 pounds this way), but you should know a few things. Great athletes like Mr. Steinborn also had a background in wrestling (that does a little to build your body) and lived during a time where manual labor would have been a big part of their lives as well. Why does this matter? 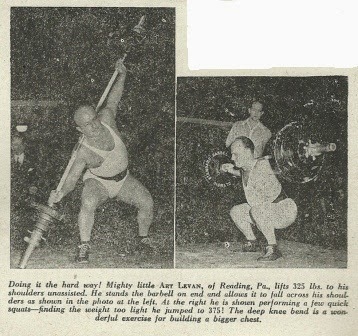 When you take your client, or yourself, and you have less than 10 years of continuous activity under your belt, you should be asking yourself if this is GOOD for your body. Something you are going to hear me say a lot, if you can survive a lift, it doesn’t mean it is good for you!

How about some science though, ugh, I know, science. Keeps ruining things doesn’t it!

For one, having an upright trunk is really important! A study by Russell and Phillips (here), the angle of the trunk was the biggest indicator for risk to the low back. Additionally, a paper by Brad Schoenfield, SQUATTING KINEMATICS AND KINETICS AND THEIR APPLICATION TO EXERCISE PERFORMANCE “Moreover, because lumbar forces are increased with increases in forward lean (55), it is beneficial to maintain a posture that is as close to upright as possible at all times.”

I mention this because it is often VERY hard for many people to be very upright in a back squat. Maybe you are one of the few or your clients are capable. There are some other factors to think about. One is a classic study by Cappozzo, et al., that found, “During half-squat exercises with barbell loads in the range 0.8 to 1.6 times body weight the compressive loads on the L3-L4 segment vary between 6 and 10 times body weight.” Pretty impressive, right?!

Josh tells me that a lot of fitness people MIGHT be familiar with all this, but then comes the idea of axial loading. The primary way of applying axial loading is via load on the back. Now, does this REALLY do anything to your back? In a not so famous, but VERY interesting pilot study by Popovich, J.M., et al (here) researchers did look. What did they find?

What was MOST interesting was there was no movement, just standing placing axial load to the individual!

So, if this information IS known, why do people still create such a risk? I believe many are afraid they won’t get strong, or get the body as strong. However, there is no evidence to support this. In fact, a study be Gullet, JC, et al, (here) found “The front squat was as effective as the back squat in terms of overall muscle recruitment, with significantly less compressive forces and extensor moments.”

What does this mean for your training? One of the big reasons we speak specifically about the variety of holding positions in your squat with DVRT Ultimate Sandbag Training is to both build great core and leg strength. Press Out, Front Loaded, and Bear Hug Squats are all tremendous ways to build great core and leg strength at the same time. Why do I say both? That is because if you don’t have core strength to match the leg strength you are building you won’t be able to express the leg strength in functional ways. This goes back to what Dr. McGill says, “proximal stability for distal mobility”. While he initially meant this as a means of moving better, it also means for the transfer of force. If you have strong legs and a weak core, you won’t have strong legs when it matters!

That is why we move to a Sprinter Stance and a lot of split stance work. Why? As Dr. McGill points out, “For example, a football running back can train with power cleans to a high level of proficiency, but if he can’t perform a one-legged squat matrix without falling over, he can’t truly make use of that strength and power in an athletic context.”

You can trade the football example for basically anything functional or every day life.

One of the goals of DVRT Ultimate Sandbag Training is to have you ask the questions “why” and “can I do it better and safer”. There is no such thing as 100% safe, but we should aim to maximize results and minimize injury. I hope that article like this give you ideas and understanding to both!