Where Most Go Wrong With Low Back Pain 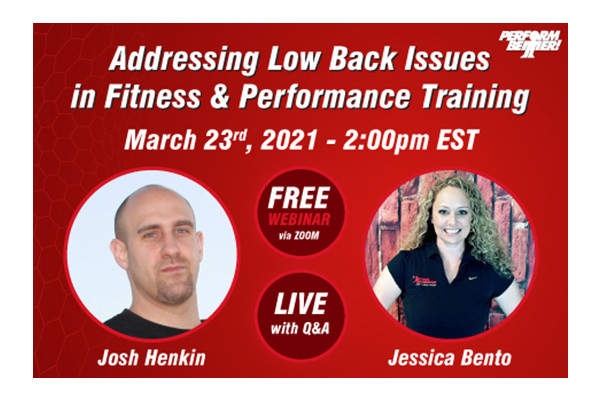 Low back pain is obviously a very personal topic for me as I’ve battled a spinal degenerative disease since I was 14. Knowing both the physical and emotional challenges of having chronic pain makes me want to share better strategies of helping those with the similar issues. We know the stats of 80% of Americans experiencing low back pain at some point in their lives, but there is great misunderstanding of these stats as well as how we approach the issue. So, where do most go wrong in helping those with chronic low back pain? 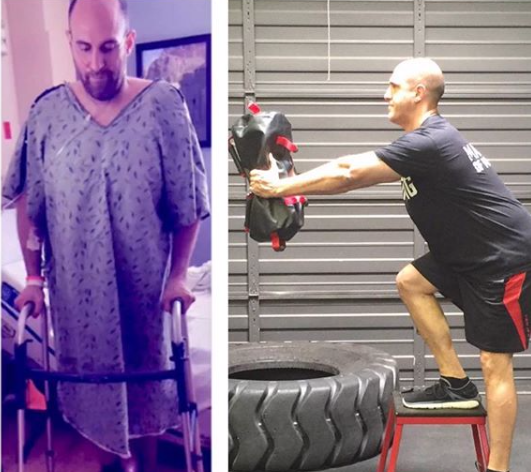 I’ve personally gone though have to learn to walk right again and understand what some of the greatest challenges of low back pain can cause.

One of the biggest misconceptions about low back pain is that all low back issues are the same. That stat of 80% of Americans doesn’t make the important distinction between acute versus chronic pain/injury. For example, you go do something today and find yourself tweaking your low back. The chances of your recovery from such an incident is actually pretty high. Such a situation is considered an acute injury, but where we run into bigger challenges are those are people that fall into the chronic category. This typically tends to be people that have low back pain for over a 3 month period. How does chronic versus acute impact our recovery from low back pain?

Many studies show that when it comes to acute low back pain, almost 90% recover within a 12 week period, that’s pretty darn good! However, when it comes to those that show more chronic low back pain, those stats often drop to less than 50% show recovery at any point, a HUGE difference. What does that mean for our training and those that often come to us for low back pain issues? First, we want to distinguish acute versus chronic, that is because acute issues can be helped by simple strategies like rest, therapeutic techniques like manipulations, massage, acupuncture, over the counter NSAIDs, etc. Those who report for chronic low back pain have more complexity and issues we need to address. It doesn’t mean we can’t use any of these strategies to help our cause, just the fact they are less likely to address many of the bigger issues one is facing.

I think one of the most important things is to admit that addressing low back pain isn’t easy for the person trying to help the one in pain and it definitely isn’t easy for the person experiencing the pain. One of the mistakes I made in both being the one that had the issue and trying to help many with more chronic low back pain was thinking that I could easily identify the issue. The reality is that low back pain can be caused by many different things and sometimes even have combination of issues going on. This is actually not a full list that could be contributing to our problems. 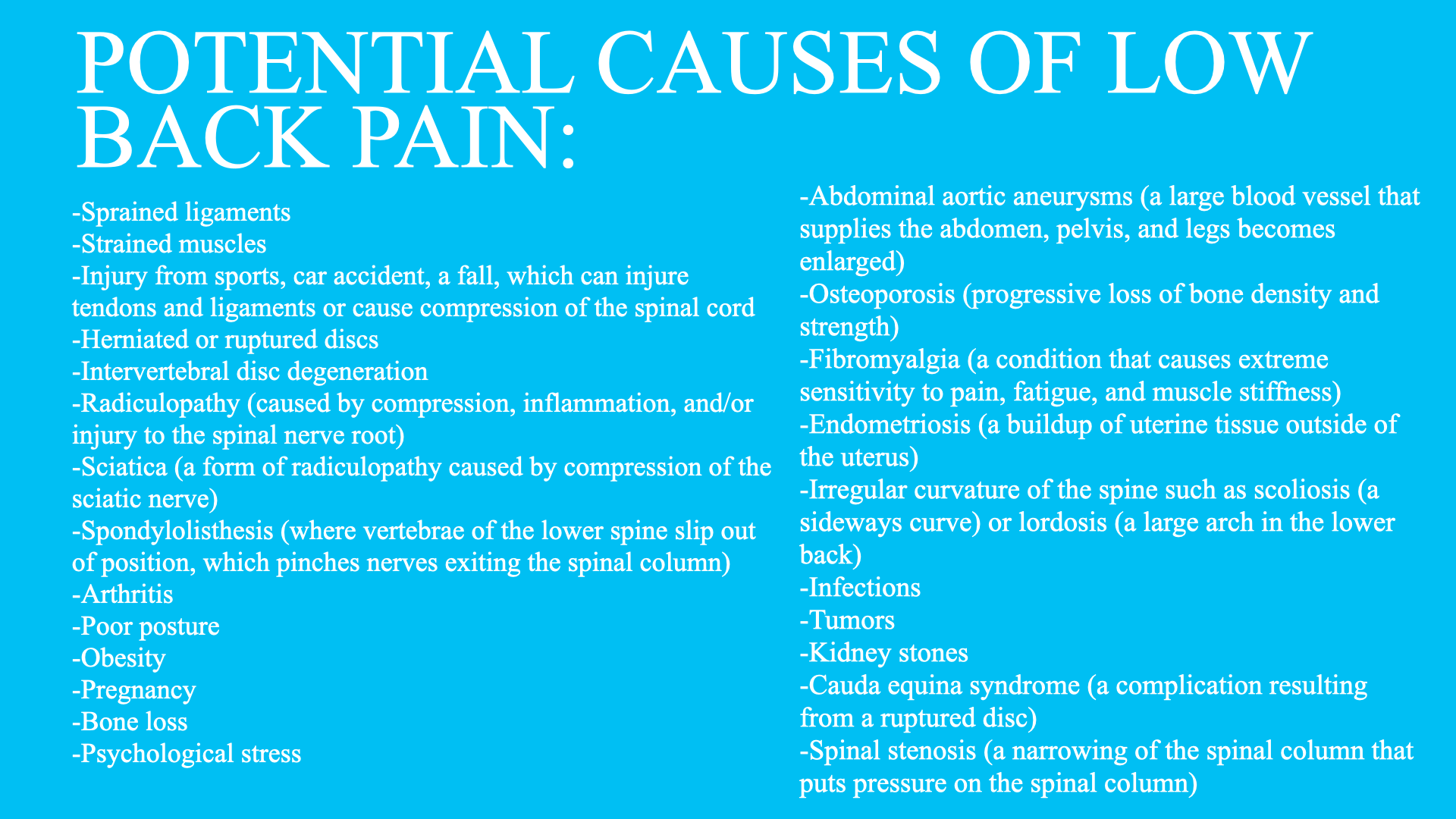 One of the first things that any fitness professional and/or sports performance coach should STOP doing is trying to diagnose or think we can pinpoint the issue. I often tell the story of helping a fellow coach with their low back pain. Being especially arrogant at the time thinking I knew how to fix all low back pain I thought helping him would be no big issue. Well, after working with him for a few hours he felt slightly better, except later that day he got MUCH worse almost to the point I thought we were going to have to bring him to the emergency room. Find out not much after that he had tumors in spine causing him the severe pain. That humbled me greatly and changed my perspective of thinking I could “fix” everyone and knew what was happening to everyone with low back pain.

Instead, I thought about how I, as a fitness professional, could help people coming to me with low back pain the best considering the knowledge I had and my scope of practice. That led me to some of the following suggestions of where to start and what to prioritize with people. Because one of the BIGGEST issues that almost never gets discussed in helping people with low back pain is that they have limited energy and ability to tolerate physical activity. That means we have to prioritize what we can make the most impact upon and sometimes layer other things over time.

When we are discussing ab exercises we are generally looking to stress and fatigue specific abdominal muscles. How many times do you hear someone say “this exercise trains your obliques more”, or any number of abdominal muscles? The big difference here is that core stability refers mostly to what spine expert, Dr. Stuart McGill calls “core stiffness”. What’s that? 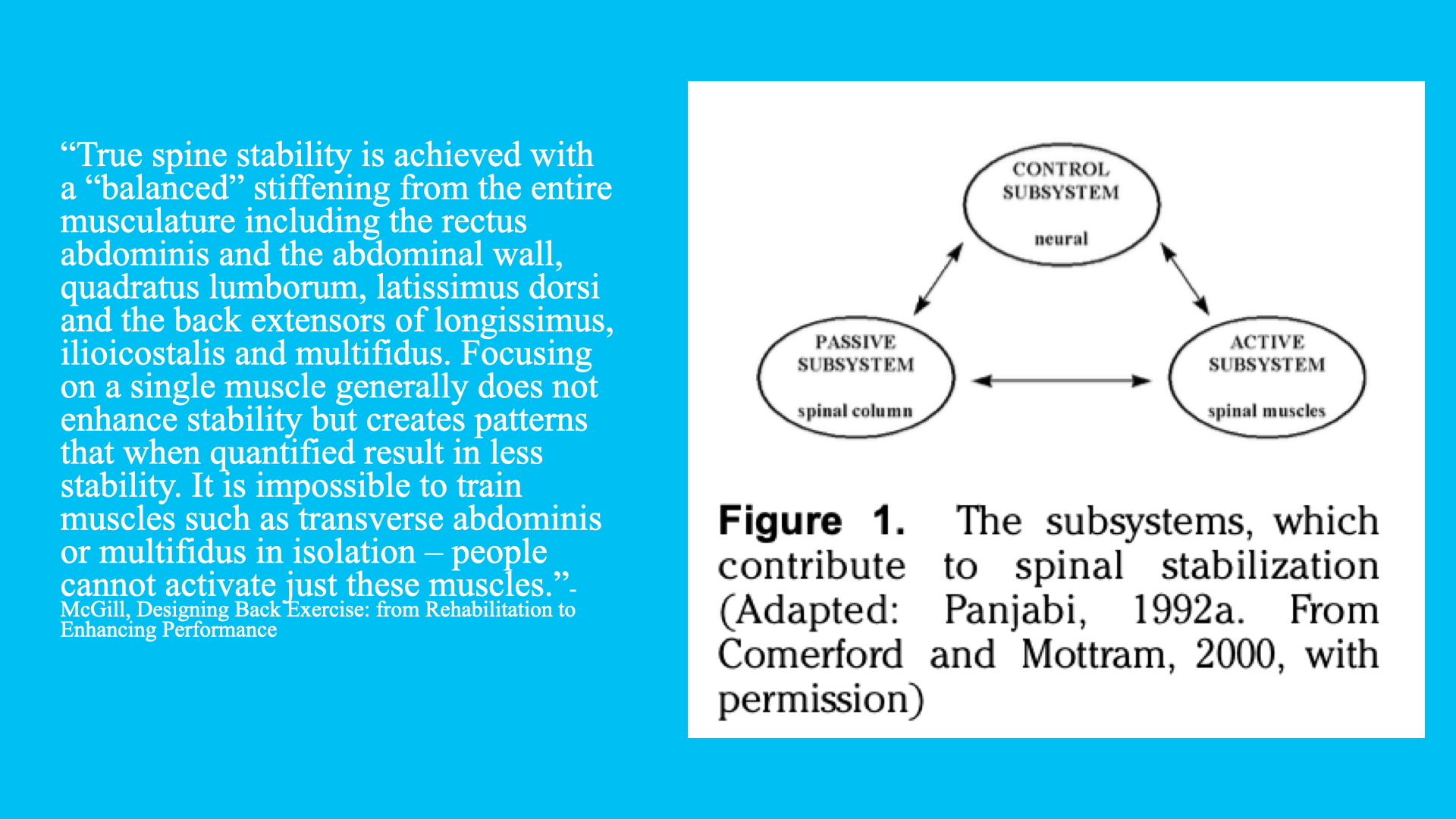 Where ab workouts try to train or emphasize different individual abdominal muscles, core stability is about trying to get all 35 muscles of the trunk to work synergistically to create stability for our spine. How do we do this? Yes, planks can be a way of teaching core stiffness as long as we do them correctly as shown below.

While planks done well are a great core stability starting point, the reality is that the great majority of people that have chronic low back pain can’t perform them or tolerate them well. Most don’t have the baseline stability to actually perform or benefit from planks. Unfortunately these leads to many coaches just having clients do lousy planks because they don’t know where to start them.

What’s the answer? We have many regressions we can use of the plank, but when we think of where to start people it is easiest to think of taking away the need to support most of their body and a more stable environment. When you put those things together you find that the dead bug is a better starting point. Not the way MOST start people with the dead bug that tends to be WAY too advanced for those with chronic low back pain.

Those with low back pain don’t know HOW to use their core properly and the standard dead bug also requires too much strength from people due to the long lever arms the arms and legs create. Instead, we need to start in giving people feedback like we do with the Ultimate Sandbag and understand how to reduce the intensity as Ben Beeler shows below.

Allowing people to start at the right place and build both strength and proficiency are so key. Far too often coaches want to progress their clients before they are ready. Trust me, what may seem simple for you can be extremely challenging for someone with low back and they are in NO rush to get to the harder exercise. That is because the biggest concern often with those with chronic pain is that they will do something that causes their pain to get worse!

That doesn’t mean we don’t have tons of progressions, we do, we just have to be very thoughtful about how we use them and how we layer the smallest level of more challenging movements. What Ben shows below are great DVRT progressions of the dead bug, but by no mean shows ALL we can do in trying to build the smallest incremental changes.

If you have followed Dr. McGill’s great work you will be familiar with his “Big 3” core stability exercises. These are the 3 core stability exercises that he researched to be the most important in establishing foundations of good core stability. Those are, curl-up, bird dog, and side plank. Now, the bird dog is a progression of the dead bug so we already started that conversation. The curl-up is a bigger can of worms we can address at a later point, but the side plank is the movement that I think often surprises people. While most would assume the front plank would be foundational, the bird dog is a better option because the more comprehensive needs of core stability and addressing the potential issues for low back pain. However, the side plank is key due to the frontal plane stability it offers.

Most don’t think about frontal plane stability being the key for helping treat or reduce the chances of low back pain, but if we break down how we move it makes a lot of sense. There may be no easier way of explaining frontal plane importance than looking at maybe the most common human movement, walking. When we walk, assuming it is just straight ahead, we move forward through the sagittal plane, we use opposing limbs to create some rotational forces, but we have to RESIST the frontal plane as we both spend a considerable amount of time on one leg and at the same time are creating quite a bit of force to move our bodies forward. This inability to resist frontal plane motion is a common cause of pelvic instability and low back pain. 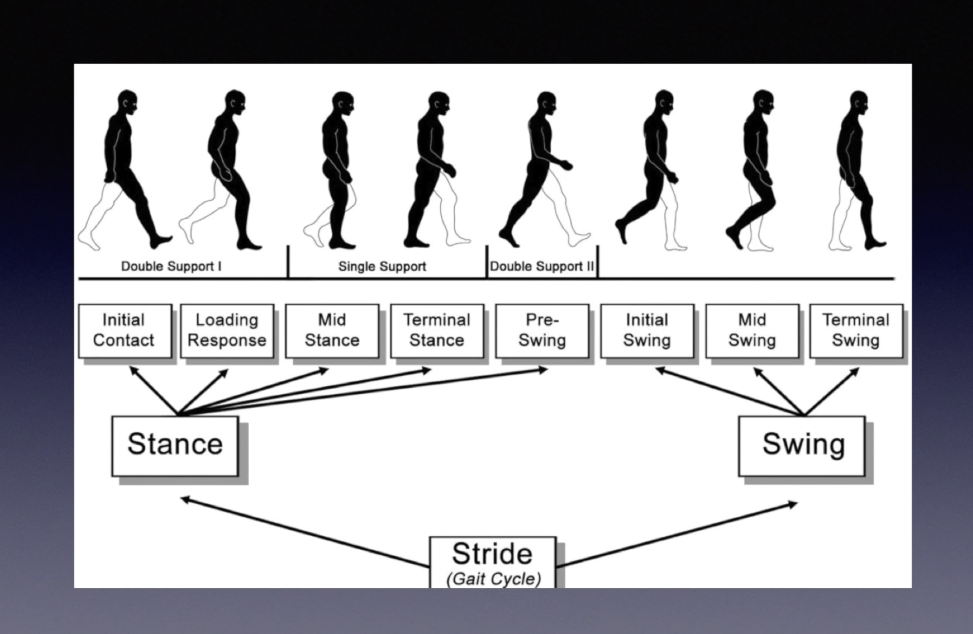 This also explains why loaded carries are often WAY too advanced for people with low back pain.

We’ve talked a lot about the side plank in our DVRT posts and it is a big part of our programs. However, like the front plan, or even the bird dog, the side plank for a number of reasons can be too advanced for people. It is often overlooked that supporting one’s own bodyweight can be a huge task that overwhelms many for a number of reasons. That is why we really love using the half kneeling position as most people can get into this position no matter their age, bodyweight, and even their level of stability at that time. 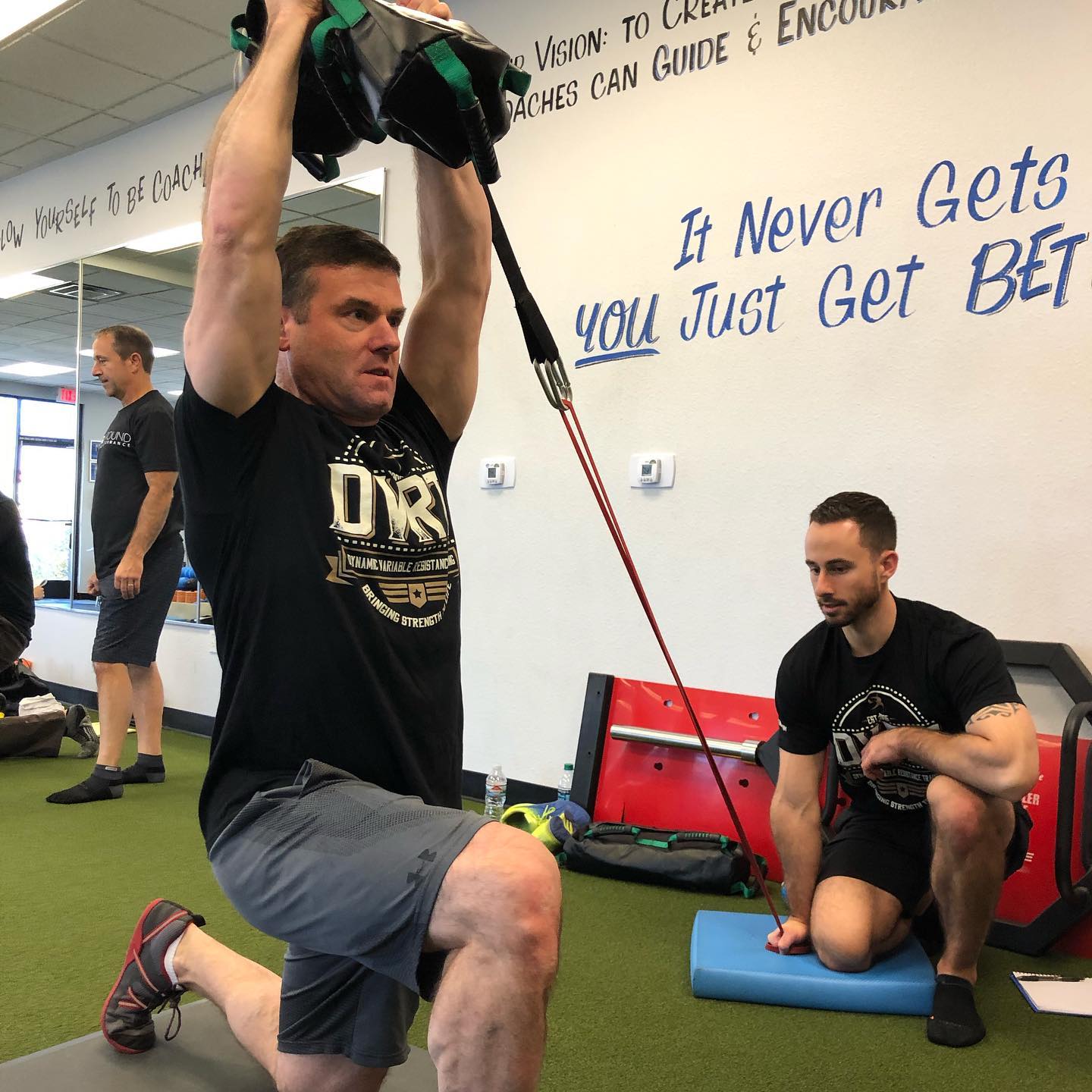 Owning half kneeling positions are key before we even get into the drills we will be performing. Physical therapist, Jessica Bento, does a great job of breaking this down.

Jessica shows a great staring point for these half kneeling movements in our Press Outs. An exercise that isn’t complicated but many overlook the finer points that make it such a powerful exercise in teaching how to build that core stiffness.

Once we get the foundations of the Press Out and build that foundation of strength and good movement skills we can slowly build progression in going to our half kneeling arc press as Megan Berner of Fitness Lying Down explains.

One of the larger points I hope to convey through posts like this is that low back pain is complicated with A LOT of different aspects of our training that we have to consider. This was to get us seeing the bigger picture and thinking about developing better starting points for a lot of people. In upcoming posts we will continue to show how we build progression but address other issues like mobility. However, I hope that you will take your time practicing both how to perform these movements and use some of our cues to help communicate to others how to get the most out of them. If you want to learn more and see a lot of these progressions come to life don’t miss our FREE webinar with physical therapist Jessica Bento TOMORROW HERE