I have been extremely blessed these last few weeks to go to North Carolina and assist instructing the USMC’s trainers on the finer points of DVRT using both kettlebells and the Ultimate Sandbag and now just returning from a very fruitful workshop in Detroit! 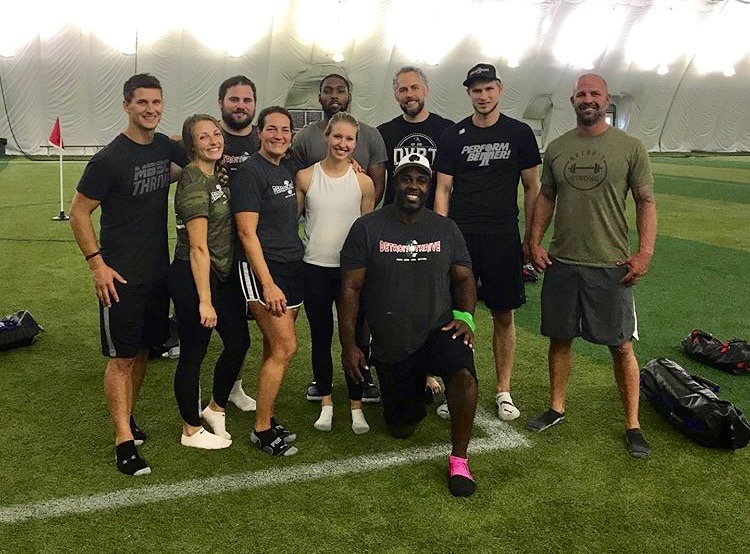 A little backstory on this most recent DVRT mission. I met Mike Fox, co-owner of Detroit Thrive, at the Perform Better Summit in Chicago this past June. He bought a whole bunch of Ultimate Sandbags, but really didn’t know exactly what to do with them. Through our conversation in Chicago he wanted to learn more about using the USBs correctly and was interested in an inservice.

After some back and forth, Mike decided that a workshop would benefit his staff, so we set it up … but I don’t think they really knew what was coming! When I arrived, everyone was very courteous and hospitable as we discussed the gym and it’s five year history.

Side note, as a gym owner, I love to hear the stories of other gym owners and why they decided to go into business. And as a fitness professional, I enjoy listening to what motivated other fit pros to get into the game of fitness, too!

Once again, I digress – let’s get back to the main story!

So after some chit chatting it was time to officially begin the workshop and I had this sense as I was going through the introduction and DVRT history of how most of them, if not all of them, might have been thinking about other places they’d rather be at that moment than at the gym on a Saturday afternoon. And, similar to the fitness pros in North Carolina, I found out after how these coaches were under the impression that this was going to be a 4-hour workshop about sandbags. Little did they know what was about to hit them!

It never fails. Dead bugs. Once we got through the introduction and history of DVRT and the Ultimate Sandbag, the first drill in the workshop is this popular restoration exercise. After explaining “task vs intent” and how intent drive intensity, I requested a volunteer (especially one with poor shoulder mobility). And as my volunteer, Dave, was approaching, it was easy to see that his shoulder health was very subpar. I took him through the FMS shoulder mobility screen and it became very visible how poor his shoulder mobility actually was!

With a little coaching and instruction Dave performed 3 dead bugs on each side while holding onto a 25 pound power USB (and I’m really happy there were some Perform Better XL Mini-Bands for extra feedback). Dave then returned to his feet and we re-screened his shoulder mobility and … wait for it … significant improvements! At least TWO inches of mobility gained in each shoulder! Let’s just say there was a lot of WOW faces.

I used this opportunity to explain proximal stability equals distal mobility. Basically, the more the brain senses stability in the core (you know, that thing in the middle of your body consisting of 35 muscles), it will give permission to the shoulders and hips to have more range of motion. Stretching and foam rolling isn’t necessarily wrong, but at times it doesn’t provide the optimal solutions many are looking for to improve shoulder & hip mobility.

As we continued venturing through the dead bugs using the Ultimate Sandbag, Dave let me know how holding onto the handles and pulling them apart gave him this “stretch” feeling in his shoulder blades like he has never experienced before and it was the best his shoulders & scap area has felt in years! Now before you get all excited, Dave also discovered how overhead pressing (which he could not do without a significant amount to pain in his shoulders) could actually be done pain free!

This is what brings me such joy as a DVRT Master Instructor: motivating others about moving better

And it wasn’t like he was using a 10 pound core or 25 pound power USB, Dave was pressing a 45 pound strength USB over his head PAIN FREE; he – and everyone around that knew Dave – were completely shocked of how this could happen because everyone knew Dave hurt when he went overhead.

Explaining what we know so well in the DVRT universe: how important it is to use your feet when pressing to create the necessary stability for functional mobility in the desired areas. When we can get away from gripping & ripping and muscling through exercises the core gets a chance to shine and demonstrate how strong we actually are!

Not that Dave finding his ability to press overhead pain free isn’t impressive enough, but another success story giving me goosebumps that I’d like to share with you, too!

I met Monica outside the gym before the workshop began and we talked about her history of becoming a coach at Detroit Thrive and her background. While she was explaining about being a client first and then being asked to join the staff as a coach and her role with the interns, she also brought up the fact how her knees weren’t very good and that prevented her from squatting. She’s been told by her doctor how she has the knees of a 95 year old (I’m sure something you don’t want to hear at 45!) because of her one knee being bone on bone with some ACL reconstruction and a little “clean up” surgery 15 years later.

Sounds like the perfect candidate to sit out during the squat segment, right?

The first squat we like to introduce using the Ultimate Sandbag is the press out squat. Grabbing the USB with the hands really engages those lats – which we know are very important for the makeup of the core muscles. Coupling the hand grip with the feet pushing down into the floor, amazing things have been known to happen allowing people who haven’t been able to squat in years without knee pain now squat pain free!

Even though it wasn’t shocking for me when it happened, I still get excited about it like it’s the first time I’ve seen it; Monica descended into her squat deeper than she has in a long time – and WITH.NO.PAIN! She, and the group around her, were in utter shock and amazement because they knew Monica can’t squat. What’s up with this? My answer, ‘do you want to see her squat lower?’

I took an XL mini-band and put it above her knees and then put a mini-band around her feet. Getting her set up and ready for another press out squat, I asked Monica to try to break the mini-bands around her thighs and feet as she slowly pulls herself down into the squat and if her first squat without the mini-bands didn’t have jaws dropping – this had everyone in awe! And this was a good time to emphasize the joint-by-joint approach laid out by Gray Cook and Mike Boyle. 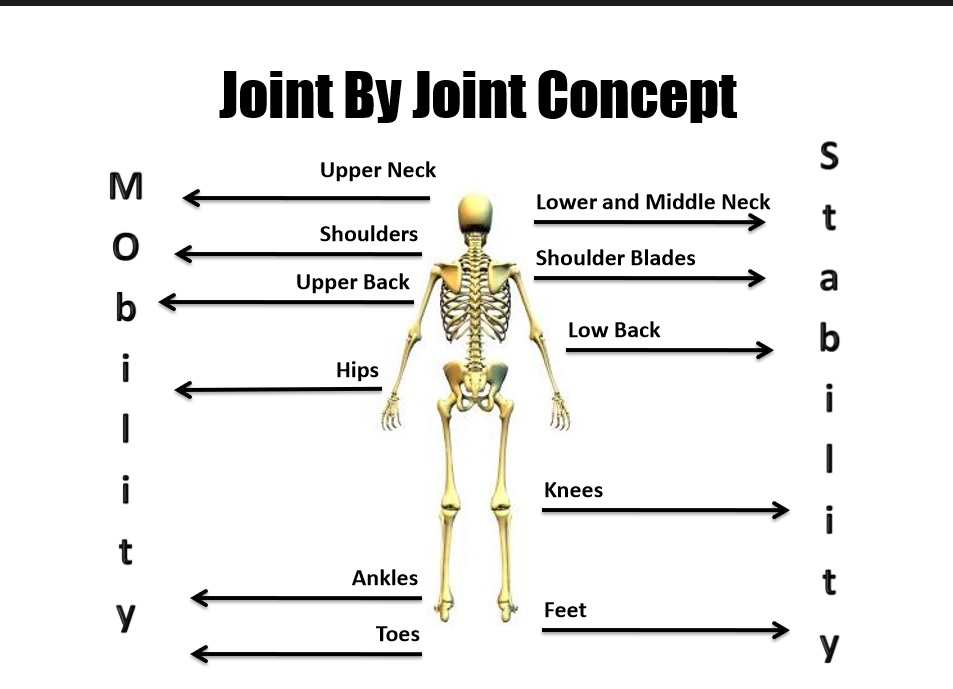 Basically, each joint has a dominant role in stability or mobility and when that joint does it’s job then all is peachy. When a joint fails in it’s role, then the joint above and below has to work overtime and perform a role that they’re not good at. So, for instance, the foot is stable and when it lacks the stability, the ankle has to pick up the slack and try to be stable even though it’s a mobile joint. Then the knee has to do it’s best to be mobile even though it’s a stable joint and that is where lots of problems happen. Ever see someone’s knees, or just one knee, cave in when squatting – whether going down or coming up?

Getting those feet plugged in sets the stage for a successful squat and that’s what the mini-band around the feet teaches. The XL mini-band above the knees is there for a little more feedback – and it helps to make me look smarter, too, when I ask if anyone wants to see a deeper squat 😉

Generating all that tension from the ground up reinforces proximal stability & distal mobility even in the squat. Monica’s core was firing on all cylinders and with the feet giving 100%, the ankle was allowed to move better and be more mobile, and because of better ankle mobility this eliminated any unnecessary twisting and turning (false mobility) of the knees – creating the stability demanded for a deep squat!

And it wasn’t only these two that left with a positive experience from the workshop. I think it’s safe to say everyone left with a different view on human movement and how we can better train the movement patterns and not just individual muscles to help create training solutions and not just add exercises on top of more exercises!

It is stories like these that make us excited to offer 25% off everything at DVRT including Cory’s great programs HERE and a special with our Ultimate Sandbags. When you purchase any Ultimate Sandbag for 25% off you can get your choice of one of our new L.I.F.T. certification modules for FREE. Education leads greater training and we want you to have the best of both. Use coupon code “save25” HERE

We often thinking building movements like squats and lunges are really challenging. We often think that issues of hip mobility are going to require tons of work. . In both cases the truth is teaching how to create proper core stability can quickly improve both how we perform and how we feel. . Check our how this simple DVRT solution can be so transformative.