When we think of core strength, let’s be honest, we think of the great looking six pack abs. Hearing people without six packs belly aching that core strength is something other than great looking abs just seems like whining, doesn’t it?! The reality is that it is true! Body fat levels have very little to do with the strength of your core, but if you do want a great looking mid-section, then guess what? Probably going to have to drop some lbs.

However, if you are interested in the BIG picture of core strength, there is a lot to be excited about. What do I mean? Real functional fitness core strength may not guarantee you a better looking bathing suit look, but it can improve your overall strength and guess what, flexibility too!

That sounds weird right? Why would core training have ANYTHING to do with your flexibility?

I first learned of this concept from physical therapist, Gray Cook. I’m going to give you the short version (which always works best for me!). Your body more than looking sweet in a bathing suit wants to survive. A big part of that is trying to maintain stability. Makes sense, being unstable means our body would be at risk for injury and before modern times injury could have meant death. Scary stuff huh?!

Well, just because we have mostly moved away from worried about getting eaten or killed by wild animals and the like, doesn’t mean our bodies have lost this natural instinct. How do we see it in modern times though? Well, when we sit all day we are artificially supported. If you don’t think we sit a lot, it is estimated that Americans sit for 13 hours a day, pretty crazy! Even if you are more progressive and got that down to 7-8, that is still a lot of sitting.

We are a long way about worrying about this, now THIS is our bigger issue…. 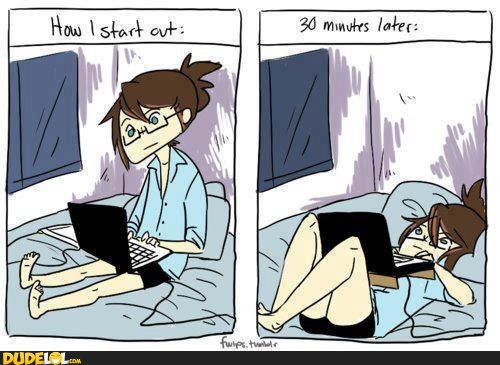 Why is being artificially supported bad for us and have any impact on our flexibility? Basically our deeper core muscles forget to turn on because they have been on vacation so long that they don’t remember when it is time to go to work! That means when we do actually move, our bigger muscles that are suppose to be doing other things take on a role they really aren’t suppose to be doing. The easiest place to see this is in the shoulders and hips.

These are big ball and socket joints which means they SHOULD have a lot of movement to them, but for many of us they are our biggest problem areas. A big reason why is that we don’t actually have good core stability.

When our spine perceives that it is unstable it is going to tell the extremities to try to build stability and that typically results in those areas shutting down.

As spine specialist, Dr. Stuart McGill explains, “How does core stiffness enhance limb speed and strength? Consider the pectoralis major muscle – it attaches the rib cage at its proximal end, crosses the shoulder joint, and attaches to the humerus of the upper arm at its distal end. When muscles contract they try to shorten. Consider the specific action here – the arm flexes around the shoulder joint moving the arm from muscle shortening at the distal end. But the same shortening also bends the rib cage towards the arm at the proximal end of the muscle. Thus simply using the pec muscle would not result in a fast nor forceful punch. Now stiffen the proximal end of pec muscle attachment – meaning stiffen the core and ribcage so it can’t move. Now, 100% of pec muscle shortening is directed to action at its distal end producing fast and forceful motion in the arm. In the same way a stiffened core locks down the proximal ends of the hip muscles producing faster leg motion. A loss of core stiffness causes the torso to bend when sprinting, and a loss of speed – some force was robbed that should have been expressed in leg velocity. Thus, a universal law of human movement is illustrated – “proximal stiffness enhances distal mobility and athleticism”.

You could have just believed me, so can’t be mad that I gave you some science.

If you didn’t follow the above, it basically says the same thing I just told you:) 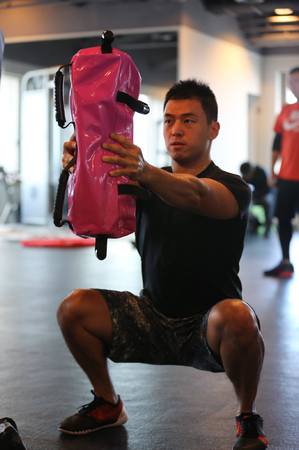 Now what is so really cool about the Press Out is that we take the concept of the plank and apply it to such greater movement. That is what we are doing today, using DVRT Ultimate Sandbag Training concepts and improving mobility through very specific ranges and areas that we may have lost.

A study by Gottschall JS, et al found that “results indicate that the activation of the abdominal and lumbar muscles was the greatest during the exercises that required deltoid and gluteal recruitment. In conclusion, when completing the core strength guidelines, an integrated routine that incorporates the activation of distal trunk musculature would be optimal in terms of maximizing strength, improving endurance, enhancing stability, reducing injury, and maintaining mobility.”

In other words, when you use the glutes and upper body in the way we show in the press out you get more core activation than even popular exercises like crunches and low back extensions. Pretty cool huh. The beautiful blend of science and making it practical, what I love about DVRT Ultimate Sandbag Training so much:)