Can Your Knees Go Towards Your Toes?

“OH NOOOO!!!” The…..toes…..are…..going……over……the……toes!!! This popular fitness myth is probably one of the biggest that won’t die.  I shouldn’t make too much about it, after all I learned and believed the same thing when I began my fitness career. The truth is most don’t know why having the knee go over the toes is a bad thing other than it is supposedly bad for your knees.

Because it is a fitness fallacy I hear all the time and keeps people from really appreciating and understanding movement, I was hoping to dispel it once and for all. Before I go too far into the discussion let me clarify what I mean the knees going over the toes.

Generally, when people in fitness see the knee moving forward causing the shin angle to change from vertical, they FREAK out! If that were to be accompanied by the bodyweight shifting to the ball of foot we could have a real issue. However, for this post we are going to assume that the foot is remaining flat and the bodyweight is staying over the middle of the foot.

DVRT Master, Larisa Lotz shows how a client’s knee can more forward but do so in a very safe way!

I mean, if you did have the “bad” version happen, I would almost see you way more unbalanced and about to fall over than knocking out a set of heavy squats.

Okay, with that said, is it bad to have the knee go over the toes. I’ve had several social media posts where that is ALL people could focus upon. Let’s first discuss the fact that some of the strongest lifters have this happen to them when they not only squat, not even when they squat very heavy weight, but when they are doing so dropping hard into the deep squat position when loads are the highest.

If you look at the knees at most Olympic weightlifters you commonly will notice the knee position that gets the average fitness professional scared to death! Yet, knee injuries are actually quite low in Olympic weightlifting. 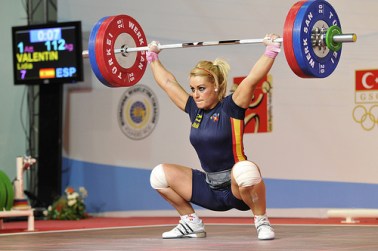 This commonly happens in Weightlifting and yet

We can also look to athletics and see the knee going over the toe all the time depending upon the action and position of the athlete. While you would maybe say, “HA! That’s how they blow out their knees!” That isn’t the case. Most knee injuries in sport happen due to the inability to decelerate well enough during change of direction. They often lack proper deceleration strength and this causes excessive stress and problems to the knee.

Olympic lifting has a lower injury rate than many sports including Powerlifting and general weight training. So much for knees blowing out when your knees move forward!

So, where does the scary, knee goes forward over the toes so gets blown out idea come from. Most of the concern comes from an older study performed on a mechanical model of the knee. In the study, researchers found there to be increased knee stress when the knee moved forward to the toes.

If there is research why am I writing this post? Well, you notice I said a purely mechanical model so it didn’t take into account the muscles or ligaments that really decelerate the knee and help support the structure. Therefore, if we were purely bony structures it might be a larger issue, but we are not.

What other science is there? Well, there is some really interesting research. In a study by one of the top strength scientists in the U.S., Andrew Fry, they measured something pretty interesting. They looked at knee stress when the shin stays vertical or moves forward. That wasn’t all though, they ALSO looked at hip and low back stress.

In order to keep the shins vertical you have to increase the flexion of your hips which increases your forward lean. The classic powerlifting squat is a great example. What did they find? When the knee traveled forward it did increase knee stress, by 22%. Is that a lot? You might wonder what that number really means?

Before I tell you let’s look at their other measurement. The change in stress to the hip and lumbar spine increased by 1070% when the shin was kept to a vertical position. So, I always wondered when people suggested such a position why they weren’t WAY more concerned with the low back and hip health?!

In THIS study, researchers found that the increased knee stress that is created when the knee moves forward was well within the tolerance of the knee. Every movement has a cost and benefit to its performance. While forward knee movement does increase some stress on the knee, the tradeoff to putting THAT much in the low back and hip doesn’t seem like a smart one.

When we combine this with the idea of creating “active” feet increases the hamstrings and glutes, we quickly start to learn that there really is no big deal in having the knee move a little forward. Especially because doing so also helps mobility of the ankle, knee, and hip which is crucial for reduction of low back issues and increase in power output.

Understanding a little science can go a LONG ways in changing how you think and what you do in your training. That is why I am proud of the education we focus upon delivering to you with DVRT. As I often tell people, we aren’t a “sandbag training” company, we are a movement strength education company!

Watch the video below to watch how we properly cue squatting and move past the fear of knees going forward! Having purpose with everything you do is key to success.

Learn how DVRT continues to change the world of real world strength training. For a VERY limited time save 25% all throughout our DVRT site with coupon code “save25” (excluding live events) HERE