People often like to say “there are no bad exercises”, but that really isn’t true. A bad exercise can be one that has an unreasonable risk to the reward, it could be one that is inefficient compared to other exercises for the same goal, there are a lot of reasons. However, one that isn’t nearly as obvious to a lot of people is an exercise people that use for one thing that really has very little to do with the goal of the actual exercise. That is how we get to the worst chest exercise!

We don’t really talk a lot about muscles here at DVRT because it literally is impossible to isolate any one muscle and the body isn’t designed to have the muscles be isolated so why train that way? In recent years people have tried to be smarter about their training and they think they are using functional training for their workouts when they often miss what would actually help achieve their goals. Since we think training for aesthetics is still important for people, we are not against training muscles, but we want to do it smarter and with better exercises. So, what makes THIS exercise the worst chest exercise? 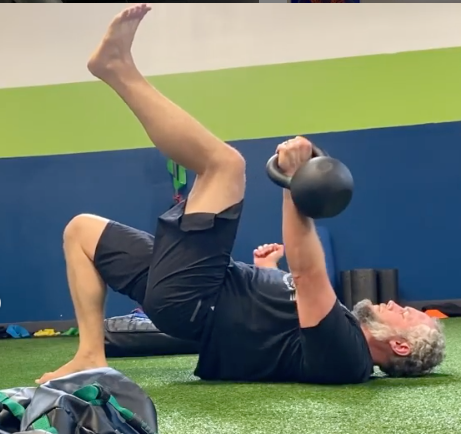 This is NOT a strong “chest exercise”!

In an effort to incorporate more of the body when they workout (which is awesome) people have been using exercises in the form of dead bugs and hip bridges to incorporate their “chest pressing”. I put chest pressing in quotation marks because what they think they are doing as a great chest exercise has very little do with the chest actually.

I like to think we have played a part in exposing people to such drills as we have been teaching them for over a decade. However, people often don’t read WHY we do them and it has nothing to do in giving another chest exercise. Isn’t that a bit unfair though? Isn’t there a history of people using bridging, for example, to build their chest training? 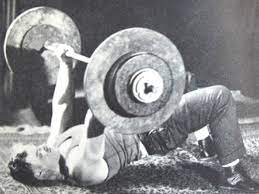 Putting things into context is important for this discussion. Yes, obviously people have used these strategies in the past when metal was too expensive to have a lot of so they tried to work the body in different ways to make the exercise more challenging. However, this is a great opportunity to also explain where stability training goes wrong.

Modern science shows us when we get REALLY unstable in a movement our body can’t create high levels of force because it is working so hard not to just fall over. So, when we get in these really extreme positions the amount of weight we can use to train an area of the body drops off so much it becomes a poor choice. So, while these old time lifters didn’t have the options we have today, they tried to make do.

A great example is if we flip over and do a push-up row. This exercise is NOT a “back exercise” (just like a bird dog row shouldn’t be viewed as a back exercise either) the exercise is in such an unstable position that most people can’t handle nearly the load they would in just a three point row. The push-up row is a core exercise and the pulling up of the weight is used as a means to challenge the function of the core. The same can be said with these dead bugs and hip bridges with the pressing.

When you see in DVRT we use kettlebells, for example in a hip bridge or a dead bug, the goal is NOT to use it as a chest exercise. The simple fact is that 99% of people are going to be in too unstable position load their upper body, so what are we doing. In DVRT we are using the kettlebells as a progression of the Ultimate Sandbag in these drills because we can’t create the tension to pull the weight apart to give us that core stability. Instead, we have to rely on more reactive stability from our core because we can only grab the weights tightly as a means to connect to our core. The movement of the kettlebells is a way to build progression to no weight at all because again, people misunderstand the goal of these drills.

DVRT Master, Cory Cripe explains why we use the kettlebells in the dead bug and how it is a progression of our foundations with the Ultimate Sandbag. It isn’t a chest exercise, more of a “connection to the core” exercise.

Once we understand that our level of instability is going to limit the force by the upper body and that isn’t even the goal then we can look to seek why the little details make such a difference. For example, pressing both kettlebells up is going to be easier than alternating or using just one kettlebell.

In the above video, physical therapist, Jessica Bento helps me break down the little details that make this a very effective way to build better core stability, stronger glutes, but it isn’t a chest exercise.

These videos (excepts from our Progressive Kettlebell Movement Certification you can find HERE) are showing how we layer progressions not in how heavy we can go in these movements, but adding small layers of instability that continue to build that higher level reactive core. You see, people think that heavier is always better, but in high level core training the LESS feedback and tension you can use in a core exercise and perform well is much more challenging and beneficial. That is because in reactive core training you don’t want to use a lot of feedback on how to use your core as the term implies. The whole point of a lot of these exercises are to just serve as foundation so that as we get stronger and more reactive we can go more upright and use more complex positions that are far more functional.

Jessica shows below that much higher levels of these movements is going single leg and using strategies like alternating presses where our core/pelvis (not really our upper body) are asked to work harder. That serves as a foundation for more advanced kettlebell exercises as she goes on to demonstrate. The moral is that these don’t reflect what makes for a great chest exercise because that was NEVER their intent. Sure, the upper body gets some work, but not to the same level as exercises you could use like those we show HERE. Make sure you know the point of an exercise before you use it in your workouts for a specific goal!

Don’t miss this week where you can save 25% off DVRT education, workouts, and Ultimate Sandbags. Since we think learning how to use our DVRT tools to the highest levels is where the power of our program comes in, we will also give you our Programming Module from our L.I.F.T. certification for FREE with any Ultimate Sandbag order. Just use code “program” HERE. This isn’t just about Ultimate Sandbags!!!